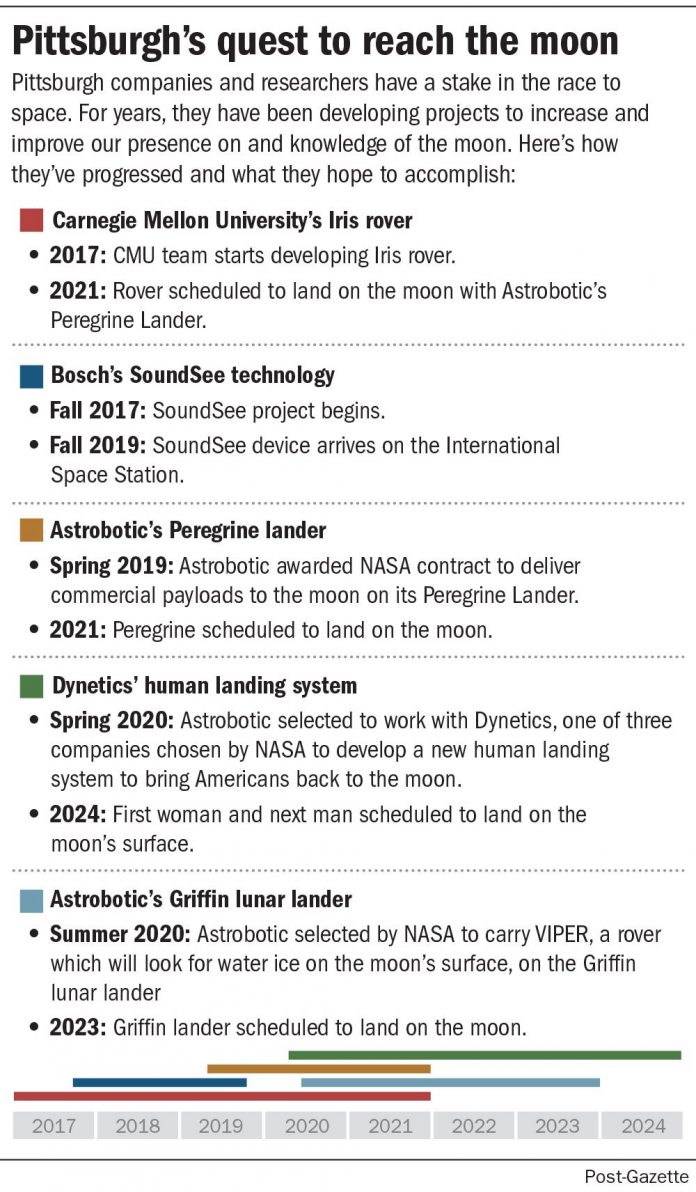 
Some Pittsburgh rovers are gearing up to take big steps for mankind.

Carnegie Mellon University researchers are developing what could be the first American robotic rover to explore the moon’s surface. Designers at the Bosch Research and Technology Center in the Strip District are creating a system that will use acoustic sound waves to monitor the International Space Station.

And Downtown-based lunar tech company Astrobotic is working with NASA on: carrying commercial payloads to the moon in 2021; creating a rover to search for water on the moon in 2023; and developing the human lander system that could carry the first woman and next man to the moon in 2024.

“There is a space ecosystem ready to be built around robotic and logistics transportation in this city,” said Justine Kasznica, an attorney for Babst Calland, which is working with Astrobotic to develop a blueprint for the payload delivery system.

Pittsburgh, she said, is “poised to become a leader” in the space industry the same way as Huntsville, Alabama, which is home to NASA’s Marshall Space Flight Center.

Samarjit Das, principal scientist and senior research manager at Bosch, said he sees “a lot of this space exploration spirit.”

Bosch’s device, dubbed SoundSee, successfully arrived at the Space Station in November and was unpacked in December. Now it’s waiting in line to get on the schedule to start experiments.

The ultimate goal is to use the acoustic sounds that the device detects to keep track of how the station is running and to perform audio inspections to check for anything that sounds suspicious, Mr. Das said.

For now, Bosch researchers will start with playing music for the bot to determine what SoundSee picks up.

Big steps for a little rover

Back on earth, the CMU team working on America’s first robotic rover is moving to the next phase — from design to construction.

More than two years in the making, the rover — named Iris — passed its latest design review by NASA. That means Iris is on track to reach the moon in 2021.

“We are hoping to survive everything from launch to landing and then be able to drive away from the lander,” said Raewyn Duvall, deputy program manager for the project and a Ph.D. student at CMU.

Iris is not the first lunar rover — both China and Russia have previously sent rovers to the moon — but it could be one of the smallest.

Iris weighs about 2 kilograms, Ms. Duvall said, or a little more than 4 pounds.

“Its primary goal is to be proof of tech concept so we can show that small of a rover can survive launch, can actually go to another plant and be useful,” she said.

Because Iris is so small, it is relatively uncomplicated in design — it is made up of a computer, two cameras, four motors and some batteries, Ms. Duvall said.

“The biggest spending cost of space exploration is going to be your launch,” Ms. Duvall said. “You pay by mass … because you need more fuel for more mass. If you can get the mass down, your cost goes down significantly.”

Creating a 2-kilogram rover can bring down the cost of a mission overall or can allow researchers to use more rovers than before, sending them off in different directions to quickly cover a lot of ground, she said.

Mainly, Iris’ mission is to prove a rover that small can survive. But, once on the moon, it will also collect information about the soil on the moon’s surface, take pictures of what it sees and transmit data back to Earth.

“It’ll be some big steps for a little rover,” Ms. Duvall said.

Hitchhiker to the galaxy

Iris is set to hitch a ride to the moon on Astrobotic’s Peregrine lander mission, which is scheduled to launch in 2021.

Along with Iris, Astrobotic’s Peregrine lander will carry 90 kilograms of payloads to the surface of the moon, in part due to a $79.5 million contract with NASA.

For Astrobotic, the Peregrine lander is just the start.

The company was also awarded a $199.5 million contract with NASA on Thursday to deliver another payload to the moon on a separate mission. Astrobotic’s Griffin lunar lander, which is scheduled to land on the moon in 2023, will carry the Volatiles Investigating Polar Exploration Rover, or VIPER.

The rover will survey the moon’s surface for water ice. That could be a step toward using resources in the space environment, according to a press release announcing the contract.

And then there’s the project that Astrobotic has been tapped for by Huntsville, Ala.-based Dynetics — to develop a commercial payload service. Dynetics was one of three companies selected by NASA to develop a human landing system to bring the first woman and next man to the moon by 2024.

Meanwhile, Astrobotic is in the process of constructing a new facility in Manchester to build and test landers and rovers on Pittsburgh’s North Side.

A lot of demand

In the future, he hopes the moon will be just the first stop.

He shares that vision with Elon Musk, founder of SpaceX, which successfully completed a historic rocket launch last month that could mark a new age in commercial space travel.

For Mr. Musk, that’s just the beginning. He wants to build a city on Mars — and live there.

“It’s the stepping stone to the rest of the solar system,” Mr. Thornton said. “In order to really access and open up space, we need to learn to live off the land of another planetary body.”