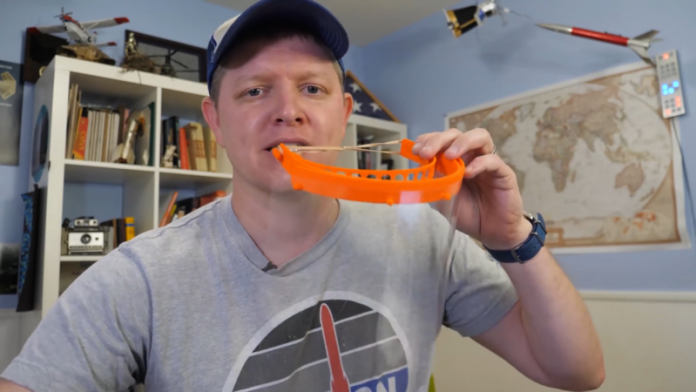 
An APR News Feature --Part of an innovative collaboration between Alabama Public Radio, the commercial newsroom at WVUA23-TV, and the University of Alabama's Center for Public Television (CPT.)

The Institute for Health Metrics and Evaluation predicts Alabama’s death rate from COVID-19 won’t hit zero for another three weeks. That prompted an emergency call from hospitals in need of protective equipment for first responders.

“We haven’t if our supplies of PPEs are going to last So, there’s been this factor of…just the unknown,” Dee Calce said.

Calce is a man with a problem. He's the chief operating officer for Huntsville Emergency Medical Services, INC., or HEMSI for short. The other technical term he threw out was PPE. You’ve probably heard that one a lot in the days of COVID-19. It’s short for personal protective equipment, and Calce said he needs a lot for the medical first responders on the front lines of the Coronavirus in Huntsville.

"If we were to lose too many of our providers to serious illness at one time...We have difficulty responding to the emergency calls that the community has on a daily basis, not even including the COVID calls we have on top of that," he said.

Enter the two heroes of our story when it comes to dwindling supplies of PPEs.

“I’ve been watching different things from Destin for years now, I thought it was the coolest idea when I saw it,” Carsen Davis said.

"Carson has been kind of our communication strategist/the dude that gets everything done. He’s awesome," said Destin Sandlin.

“Right now, I do contract work at NASA,” Davis said. “So I’m friends with, as you can probably guess, a whole bunch of nerds in Huntsville."

While we were producing this story, Huntsville and Madison County were dealing with over 200 cases of COVID-19 and four deaths. That doesn’t count the nearly fivethousand people who had been tested. In other words, there’s a huge need for the PPE gowns and masks that makes doctors and nurses look like they work for NASA.

“I don’t know, he just reached out and took initiative early on and made the website, he’s just a genius, dude,” Sandlin said.

Sandlin and Davis put together a NASA style solution to part of Calce’s PPE supply problem. They don’t sew, so gowns were out. But, Sandlin said the clear plastic face shields were another matter.

“And it’s really simple, there are four little knobs on the front and the transparency goes, there are little holes that connects on those, and it goes on your forehead, and hook around the back with a strap," he said. "It’s a really simple part, but we’re banging these out pretty quick now.”

“When Destin [Sandlin] had the idea that we’d print face shields, that was just fantastic,” he said.

The term printing needs explaining, too. He means 3-D printing. And since Davis is a self-avowed nerd, we decided to explain it this way. Say, you’re on the U.S.S Enterprise, and you wanted a drink. In the science fiction world of Star Trek, the actors would just walk up to a computer and ask the machine to make it. Script writers on Star Trek called these machine a replicators. Davis said they don’t have replicators in Huntsville, but they do have 3D printers which kind of do the same thing.

“If you don’t too much about it, it’s magical how you can start with this 3D file, and from this 3D file, you get this perfect printed plastic," he said. "Plastic piece with all this intricate detail.”

“We just got off the phone, for example," he said. "With the Mobile Medical Society and they need these bad. So, we’re going to try to crank out 2,000 and get them down to Mobile as soon as possible.”

Now, 2,000 medical face shields all printed on a 3D printer that takes three hour to make one part would take forever, right? Unless you get a whole bunch of 3D printers all working at once. You heard earlier how Davis works for NASA. It’s what Sandlin does that requires a re-introduction.

“So, my name if Destin Sandlin. I have a Youtube channel called Smarter Every Day, where I like to explore the world using science," he said.

So between Sandlin’s audience on YouTube and the website Davis created, they put out the call for anybody in the Huntsville area with a 3D printer at home to make a specific part for a Medical face shield. Sandlin said Huntsville responded.

“You had engineers, you had moms that were ‘stay-at-home’ cause you could tell because they had kids in the car with them--you had...just everybody, old people, young people, every demographic you can imagine, people were showing up and dropping off their parts.”

“I mean it was a week ago that we got our first drop offs, and we’ve already delivered thousands of face shields, and it’s absolutely fantastic,” Carsen said.

“To us that’s the light at the end of the tunnel," Calce said.

But, with success comes more demand. Along with hospitals in Mobile, healthcare providers as far away as Tennessee started calling for more masks. Davis and Sandlin have expanded their production line to include a process called an injection mold which squirts liquid plastic into mold. It’s faster than 3D printers, though not as high tech and cool. And the need may not be quieting down any time soon. The director of the Centers for Disease Control and Prevention said there would be second wave of COVID in the fall, meaning more patients, more healthcare providers needing masks, and more work for Davis and Sandlin.