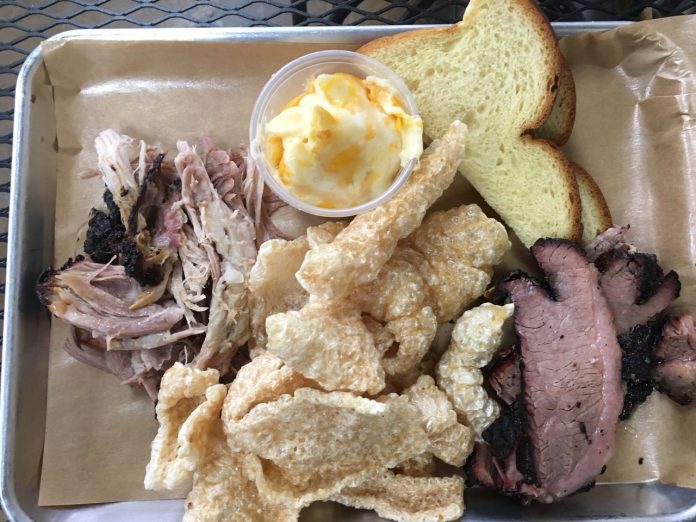 
Local barbecue buffs no longer have to drive out to Madison for Bark & Barrel BBQ’s fantastic brisket. On June 29, Bark & Barrel opened a second location, this one at popular “food garden” and music venue Stovehouse, address 3414 Governors Drive S.W. The new eatery is between El Cazador and Fresko Grille there.

Like the original Bark & Barrel, at 12181 County Line Road in Madison, the Stovehouse location is the brainchild of Tina Ford and Stan Stinson. Ford and Stinson are the clever restauranteurs also behind Earth and Stone Wood Fired Pizza at Campus No. 805 and downtown’s Self-Serve Drinkery.

In the near future, they plan to add hamburgers and fried chicken sandwiches. Stinson says Bark & Barrel burgers will be a blend of brisket, chuck and even a bit of pulled-pork. The chicken-sandwiches? Marinated in habanero wing sauce and served on a toasted bun with arugula and locally made pickles.

After the weather cools, a Sunday brunch rolls out. Expect dishes such as smoked salmon served over orzo, a trio of eggs Benedict options, shrimp and grits and a couple sweet-forward offerings. “Sunday’s jazz themed music lends itself to a brunch,” Stinson says, referring to a weekly Stovehouse live music event there.

As expected, so far, the brisket has moved well at Stovehouse. As have house-fried kettle chip nachos. A Thursday special French made with brisket is the top seller at both locations, according to Stinson.

There’s news from Ford and Stinson’s anchor venture too. Earth and Stone recently added a heartier more traditional crust option to their imaginative line of pies, which are built on a delicate thinner crust. “We’ve increased the weight of the dough for our 10- and 14-inch pizzas and are really happy with the results,” Ford says. “The pizza is thicker and more robust. We cook it away from the fire, so it cooks a little slower, making a nice chewy crust.”

Originally, Bark & Barrel in Madison was called Clyde’s BBQ, named after Ford and Stinson’s trusty dog. After receiving a certain certified letter from a Washington fine-dining restaurant named Clyde’s, which holds a nationwide copyright on that eatery appellation, the Madison spot was rebranded.

Ford and Stinson signed their Stovehouse lease in March 2019. They'd originally planned to open April 2020, but coronavirus created construction and inspection delays - as well as zapping business at Stovehouse and most other brick and mortar endeavors. "We wanted to wait to open until the foot traffic returned to the point that it was worthwhile," Stinson says.

Challenging times have required Ford and Stinson to dig in like their early days running their food-trailer that birthed Earth and Stone. Working kitchen shifts. Delivering meals. Ping-pong-ing between restaurants to maintain quality control and customer experience.

"The most valuable lesson for us has been to believe in ourselves and do whatever it takes to get the job done," Stinson says. "The opportunities that present themselves in times like these revolve around flexibility and being able to respond or change quickly." As such, Ford and Stinson's businesses began delivering more and offering read-to-go family meals.

Opening a restaurant during a pandemic has been understandably stressful. Still, Stinson says, “The exciting piece for us about opening at Stovehouse is that the outdoor seating and open space is the perfect venue for people to be able to eat and or socialize safely. There is a lot of fear in the community and many people are still too scared to leave their homes or go out to eat. I’m hopeful that this will change.”