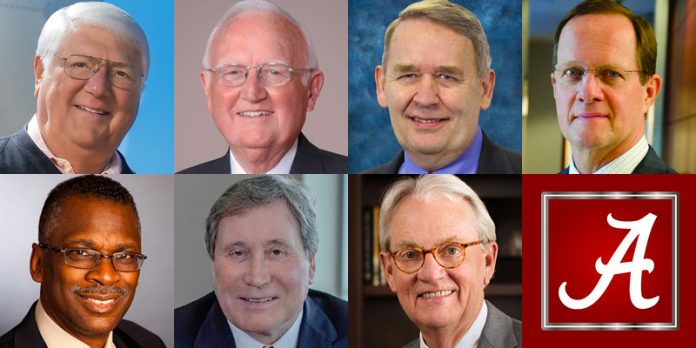 
The Alabama Business Hall of Fame on Thursday announced that seven esteemed individuals will be inducted as its 2020 class.

Established in 1973 to honor those who brought lasting fame to the state through their business contributions, the hall of fame is housed at the Culverhouse College of Business’ Bidgood Hall at the University of Alabama.

The college also organizes the annual induction ceremony. This year’s ceremony has been postponed to fall 2021 due to the ongoing COVID-19 pandemic.

Description of the inductees as follows, courtesy of the University of Alabama:

Baron founded the company with expertise and relationships earned over a 22-year career in broadcast meteorology. It was the award of a NASA technology transfer grant to access weather data that led to the development of a real-time severe weather warning system used by pilots, first responders and emergency management officials.

For his contributions to ensure public safety through free weather warning apps and other services, he was commended by the Alabama House of Representatives. He served on the board of directors of the Huntsville-Madison County Chamber of Commerce and the Huntsville Better Business Bureau. He also supported a number of community organizations that benefit the region such as Big Oak Ranch, the Boys and Girls Club of North Alabama, Manna House and Homes for our Troops.

He earned his undergraduate degree in broadcast journalism from the University of Tennessee. UT’s Haslam Business School named him Entrepreneur of the Year in 2011.

During his tenure as chairman, CB&S Bank grew from $5 million in assets to more than $2 billion in assets. The bank also grew from one office in Russellville to an impressive 56 branches in Alabama, Mississippi and Tennessee.

A veteran of World War II, having served in the United States Navy, Batchelor is committed to the community of Russellville and was twice-honored as the city’s Citizen of the Year. He is a 72-year member of the local club of Civitan International. He also led a number of community-oriented initiatives throughout the state of Alabama, including successful efforts to raise funds for hospitals and health-related causes.

Dr. Marcus Bendickson is the retired CEO and former chairman of the board of Dynetics Inc., a leading provider of high-technology, mission-critical services and solutions to government and commercial customers. Now a wholly owned subsidiary of Leidos, Dynetics has over 2,500 employees throughout the United States providing responsive, cost-effective engineering, scientific and IT solutions to the national security, cybersecurity, space and critical infrastructure sectors.

Bendickson became CEO of Dynetics in 1989 when he and his business partner, Tom Baumbach, orchestrated a buyout of its stock from its founders. Under Bendickson’s leadership, Dynetics steadily grew to the second-largest employee-owned company in Alabama, generating sales of about $275 million at the time of his retirement in July 2015. Bendickson remained as chairman of the Dynetics board of directors, leading the company through a period of unprecedented growth. Thanks in large part to his vision and leadership, the Dynetics portfolio has grown to encompass highly specialized technical services and a range of software and hardware products, including components, subsystems and complex end-to-end systems. In January 2020, Dynetics was purchased by Leidos for $1.65 billion, ushering in a new era of opportunity for the company.

He is involved in a number of organizations that serve the business interests of the Huntsville area, including serving on the boards of directors of the BB&T Greater Huntsville Advisory Board, the Huntsville Chamber of Commerce and the HudsonAlpha Foundation. He also serves as vice-chair of the UAH Foundation Board of Trustees.

Jay Grinney is the former president, chief executive officer and director of HealthSouth Corporation, now known as Encompass Health. The company, based in Birmingham, employs about 44,000 dedicated employees and offers post-acute healthcare services through its national network of rehabilitation hospitals, home health agencies and hospice agencies.

Grinney has a long track record as a leader in executive roles. Before joining Encompass Health, he was president of the eastern group at Hospital Corporation of America and senior vice president at the Methodist Hospital System in Houston. He is currently serving as a senior advisor to KKR’s private equity healthcare practice.

He has been involved with many community organizations, having served on the boards of directors of the Community Foundation of Greater Birmingham, the Birmingham Civil Rights Institute, the Public Affairs Research Council of Alabama and the United Way of Central Alabama.

Lonnie Johnson is a lifelong serial entrepreneur and innovator. Growing up in Mobile, his innate scientific curiosity led him down a path that would include inventing advanced defense and aerospace technologies as well as a beloved summertime toy.

Johnson’s career started at the United States Air Force and NASA where from 1979 to 1991 he worked on the Galileo mission to Jupiter, weapons projects and the stealth bomber program.

It was, however, a passion project made at home he is perhaps best known for. While experimenting with a heat pump and high-pressure nozzle, he realized he had the makings of a water gun. Over the years, he refined the design, and in 1989, Larami Corporation licensed what is known as the Super Soaker.

He is a committed supporter of a number of community-oriented causes such as the Boys and Girls Club and serves as chairman of the Georgia Alliance for Children. Recently, he donated $3.5 million to construct a STEM building at Williamson High School in the Maysville neighborhood of Mobile, his alma mater.

Joe Ritch is an attorney in the firm of Sirote & Permutt P.C. and a civic leader who has done much to elevate the Huntsville area with his involvement in a number of organizations. As chairman of the Tennessee Valley Base Realignment and Closure Committee, he coalesced a group of 13 communities in north Alabama and south-central Tennessee to promote and advocate for Redstone Arsenal at a time when the facility was under strategic review by the United States Army.

As a result of the committee’s work, thousands of military and government contractor jobs were brought to Redstone Arsenal, which proved to be an economic boon for Huntsville. Furthermore, he helped usher in a $175 million state-funded investment in K-12 facilities to make the area more attractive place for relocation by reason by the BRACs.

Ritch was also the first chairman of the board of directors from Alabama of the Tennessee Valley Authority and also chairman of its nuclear oversight committee. He served on the board of directors of multiple defense and technology companies including CAS Inc. and Axometrics. He has also led the acquisition and sale of several defense contractors.

Stan Starnes is executive chairman of ProAssurance Corporation, one of the top casualty insurance carriers in the country. During his time as CEO, from 2007 until 2019, ProAssurance transformed from a physician-centric, regionally oriented insurance company to one that took a healthcare-centric approach on a national level. And as a result, the company returned over $2.1 billion to shareholders while growing their equity by 37 percent.

Starnes’ background is in law. In 1975, he and his father established the law firm now known as Starnes Davis Florie, specializing in courtroom advocacy for a wide variety of clients in civil litigation, especially physicians and others in healthcare. He is the youngest lawyer in Alabama ever elected to the prestigious American College of Trial Lawyers. For his work and his well-deserved reputation, he was named to the “Best Lawyers in America” for over 20 consecutive years.