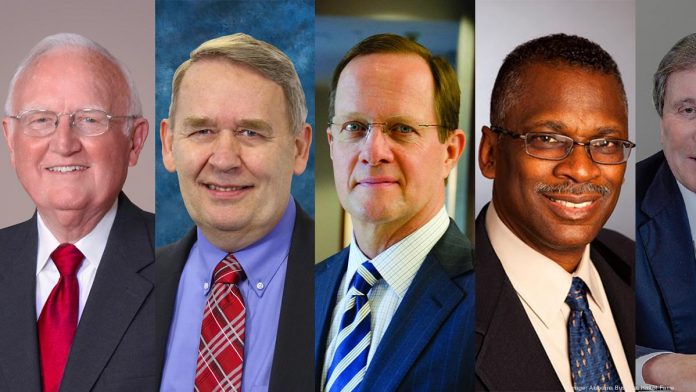 The Alabama Business Hall of Fame has unveiled the inductees for its 2020 class – and two prominent Birmingham leaders are among the honorees.

The Alabama Business Hall of Fame was established in 1973 to honor individuals who have brought lasting fame to Alabama through their business contributions.

The hall of fame is housed at the Culverhouse College of Business at the University of Alabama.

Here are some insights on this year’s class:

Robert O. “Rob” Baron is CEO and founder of Baron Services, which is an industry leader in weather forecasting and warning systems. The Huntsville-based company features a portfolio that includes weather radar, storm tracking software and climatological data analysis tools. The U.S. National Weather Service recently tasked Baron Services with the job of upgrading the nation’s radar network with the company’s products.

Cecil Batchelor is the chairman of CBS Banc-Corp and chairman emeritus of CB&S Bank, based in Russellville. His 56-year banking career is one defined by success in establishing and leading banks throughout the state. During his tenure as chairman, CB&S Bank grew from having $5 million in assets to more than $2 billion in assets.

Marcus Bendickson is the retired CEO and former chairman of the board of Dynetics Inc., a provider of high-technology, mission-critical services and solutions to government and commercial customers. Under Bendickson’s leadership, Dynetics steadily grew to the second-largest employee-owned company in the state of Alabama.

Jay Grinney is the former president, CEO and director of HealthSouth Corp., now known as Encompass Health. Grinney helped lead the Birmingham-based company to a remarkable turnaround, streamlined its business model and put it on a path to profitability. The company employs approximately 44,000 dedicated employees and is nearing Fortune 500 status.

Lonnie Johnson is a lifelong serial entrepreneur and innovator. Growing up in Mobile, his innate scientific curiosity led him down a path that would include inventing advanced defense and aerospace technologies as well as a beloved summertime toy.

Johnson’s career started at the United States Air Force and NASA where from 1979 to 1991 he worked on the Galileo mission to Jupiter, weapons projects and the stealth bomber program.

It was, however, a passion project made at home that he is perhaps best known for. While experimenting with a heat pump and high-pressure nozzle, he realized that he had the makings of a water gun. Over the years, he refined the design, and in 1989, Larami Corp. licensed what is known as the Super Soaker. Currently, Johnson is involved in developing new battery and fuel cell technologies.

Joe Ritch is an attorney in the firm of Sirote & Permutt PC and civic leader who has done much to elevate the Huntsville area with his involvement in a number of organizations. As chairman of the Tennessee Valley BRAC Committee, he helped lead an effort that resulted in thousands of military and government contractor jobs were brought to Redstone Arsenal.

Stan Starnes is executive chairman of ProAssurance Corp., one of the top casualty insurance carriers in the country. During his time as CEO, from 2007 until 2019, ProAssurance transformed itself from a physician-centric, regionally oriented insurance company to one that took a health care-centric approach on a national level. And as a result, the company returned over $2.1 billion to shareholders while growing their equity by 37%.