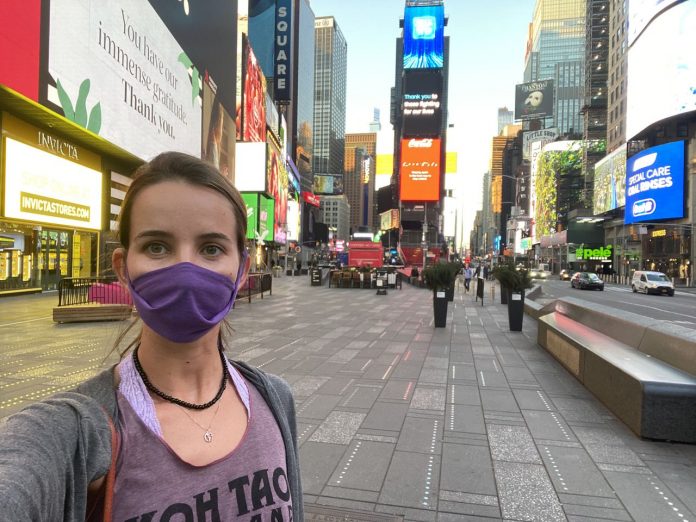 
In New York City, the epicenter of the COVID-19 outbreak in the United States, the virus that’s forced most people indoors is forcing the homeless outdoors.

Renee Corbett, a native of Huntsville who works with the international aid group, Doctors Without Borders/Médecins Sans Frontieres, or MSF, has seen it first-hand.

Corbett, a civil and environmental engineer by training, is in New York working with an MSF team providing hygiene service and infection control to New York’s homeless population. With public bathrooms and recreation centers closed, the places where homeless people could bathe are gone.

So Corbett’s team operates two mobile shower facilities for people that need it.

Before the global pandemic, Corbett had worked primarily in Africa, providing water and hygiene to people in Ethiopia and Sudan.

It seems odd that providing a simple need: clean water and a place to bathe, would be just as necessary in America’s largest city as it is in wilds of Africa.

“The homeless New Yorkers are especially vulnerable because they aren’t able to follow the standard precautions that many of us do: staying home, self-quarantine away from other people, washing hands before every meal,” Corbett said. “They also have high rates of pre-existing health conditions and can lack access to health care.

“MSF is providing something so simple, but it makes a giant impact,” she said.

“The face masks are very important in NYC because you aren’t allowed into stores or on public transportation without them,” she said.

Corbett’s job, though heroic, might not sound glamorous to some.

To her, it’s the job she always wanted.

When Corbett was 9, her family left Huntsville to live on Kwajalein, a tiny island the Marshall Islands, where the Army tests missiles and many Redstone Arsenal workers get stationed.

“We lived there for four years and had many opportunities to travel around the world. I was shocked when we visited a neighboring island called Ebeye and learned that many people didn’t have running water,” she said. “It made a big impact on my young self, and I decided that I wanted to work on water projects for developing communities when I grew up.”

She graduated from Huntsville High School in 2011. When she graduated in 2016 from the University of Pittsburgh, with a civil and environmental engineering degree, “l learned that Doctors Without Borders doesn’t only hire doctors and nurses. They hire people like me too!” she said.

After working for a land development company for two years, Doctors Without Borders came calling.

She’ll probably be home in two or three months, and after a two-week quarantine, will enjoy seeing family and friends again.

“It’s nice in NYC that the Wi-Fi is great, but in previous projects it has been hard to video call with family and friends,” she said. “I’ve missed holidays, weddings, birthdays, anniversaries, family reunions… but luckily the work is so rewarding that I don’t get too homesick.”

Shelly Haskins writes about points of pride statewide. Email your suggestions to [email protected], or tweet them to @Shelly_Haskins using #AlabamaProud