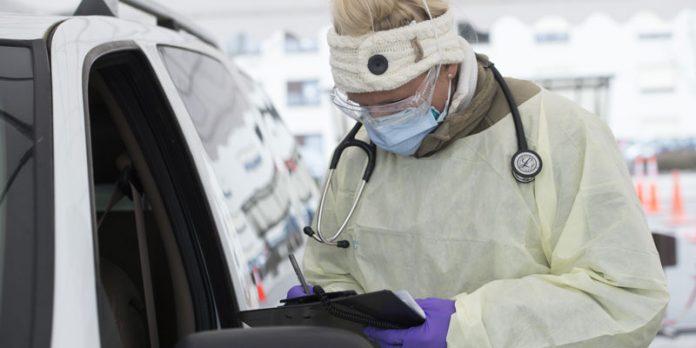 
Seeking to dispel a misconception that has become more prevalent in recent weeks, Huntsville Hospital CEO David Spillers clarified on Wednesday that COVID-19 testing is not required for a business to reopen.

At a news briefing from Huntsville City Hall, Spillers outlined that the Centers for Disease Control (CDC) guidelines do not mandate employee testing.

He noted an increase in requests for testing from people who are “nonsymptomatic.” This includes people interested in purely precautionary testing.

“We are starting to get requests from companies, as they look to go back to work, that are saying, ‘I want to test all of my employees before they go back to work,'” Spillers explained. “If everybody did that in Madison County, we would quickly run out of testing capacity. The same thing would happen in other communities that are trying to go back to work.”

Spillers described Huntsville Hospital as having a “tremendous amount of testing capacity” in-house and through four external testing labs with which it has agreements.

An effort is underway, though, to make sure the right people continue to get tested.

“CDC guidelines do not say that you test everybody before they go back to work,” he emphasized. “We are going to follow CDC guidelines. We’re going to work with the Chamber of Commerce to reinforce that with our companies that everyone doesn’t need a test to go back to work. We will continue to test people who are symptomatic and meet the criteria and reserve testing for those people.”

During her Tuesday press conference, Governor Kay Ivey advised that testing capacity would influence her timeline for loosening the restrictions currently in place.

“Until we get enough testing done, we can’t fully reopen the economy,” she remarked.

Asked about that statement, Spillers said the medical community in Huntsville is only testing people who meet CDC guidelines. This includes individuals showing COVID-19 symptoms or more vulnerable members of the population, such as the homeless.

“When I hear we need more testing in the state I think that would mean we have testing readily available to every citizen in every community in Alabama for those people who meet the criteria for testing,” Spillers asserted.

A spokesperson for Ivey later expanded on the governor’s statement on testing, telling Yellowhammer News, in part, “The governor, along with the White House, is emphasizing how testing is a critical part of the recovery and reopen effort. She has taken a smart, measured approach throughout this pandemic, and because of that, we have seen progress. In line with what the Trump Administration has said on the issue, Governor Ivey has stressed the need to see a steady decrease in cases.”

There was an additional COVID-19-related category of tests which Spillers did encourage people to obtain.

“The other test that is being intermingled with testing for COVID is the antibody test that is starting to come available,” mentioned Spillers. “Once that’s available if people want to go down to the drugstore and get an antibody test then I hope they can. I think everybody should go do that. If nothing else, you’ll know whether you have the antibody or not. I’m not sure what you will do with that information when you get it, but at least you will know and everybody will be happy that they got tested.”

MONTGOMERY – Alabama Speaker of the House Mac McCutcheon (R-Monrovia) favors a “phased approach” to reopening Alabama’s economy, and indicated that May 1 is the day the process should begin.

McCutcheon held a press conference Thursday afternoon at the statehouse to update the public on where he and the state legislature stood amidst the coronavirus pandemic.

“I would hope that we would,” the speaker replied when asked to confirm that the economy should start resuming on May 1. However, the speaker said he would defer to advisors at the Alabama Department of Public Health before making a firm decision on a specific date.