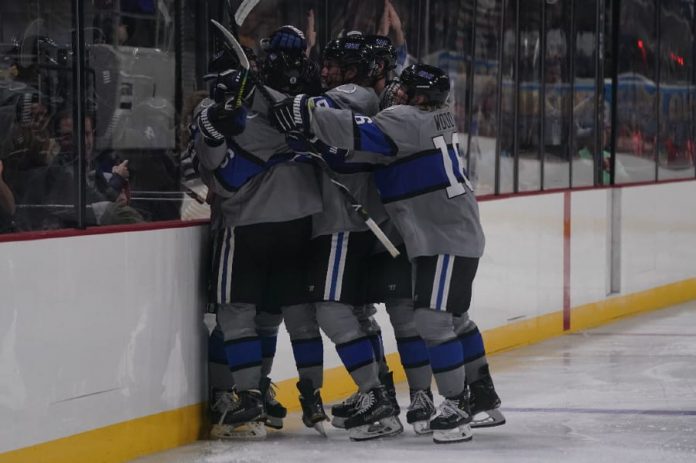 
The saga of Alabama-Huntsville’s hockey team has taken another dramatic twist as head coach Mike Corbett and assistant coach Gavin Morgan have resigned, just days after the NCAA program was saved from oblivion by a fundraising campaign.

The university had announced the end of the school’s hockey team on May 22, due to financial concerns. But an effort to save the team went viral, with $500,000 pledged in a week and two long-time supporters, Taso Sofikitis and Sheldon Wolitski, donating $125,000 each on top of that. The school itself then approved a $1.5 million budget for the team’s 2020-21 campaign, essentially matching the $750,000 that had been raised.

But the money raised only covers next season and there is still a lot of uncertainty. While Alabama-Huntsville has a conference schedule for 2020-21, they will be independents once again if they don’t find a new circuit to join once the WCHA disbands. That makes scheduling even more difficult and simply setting up more dates with say, Alaska-Anchorage and Alaska-Fairbanks doesn’t help matters because the trip up to the northern state is incredibly expensive.

Ideally, the Chargers would join the new CCHA, but the general sense is that Alabama-Huntsville would have to demonstrate a long-term commitment to hockey before that would even be considered (five years is seen as the minimum). The program has already come close to folding twice in its history and naturally, the other schools want assurances the school wouldn’t run into the same problems again.

While the timing of Corbett’s resignation seems strange, it’s understandable the bench boss would want to determine his own fate and map out a more concrete future for himself. And there had been some pressure from alumni to get the program back into form after the Chargers won just two games this season and eight the year before that. Alabama-Huntsville hasn’t had anything close to a winning record during Corbett’s time, but again: circumstances have been difficult.

That won’t get any easier for the salvaged 2020-21 campaign, as some of the players have already transferred to other schools and now Corbett and Morgan are gone. Another assistant coach, Lance West, will remain with the team as interim head coach.

The news of Corbett’s departure was shocking, but from what I’ve been told, he leaves on good terms with the school. No one ever questioned his work ethic or the amount of time he put into building the Chargers.

What the program needs now is stability and it won’t come cheap. But if the past few weeks have proven anything, it’s that many in hockey want to see hockey survive in Huntsville. Now it’s a matter of finding enough money long-term to make it happen.