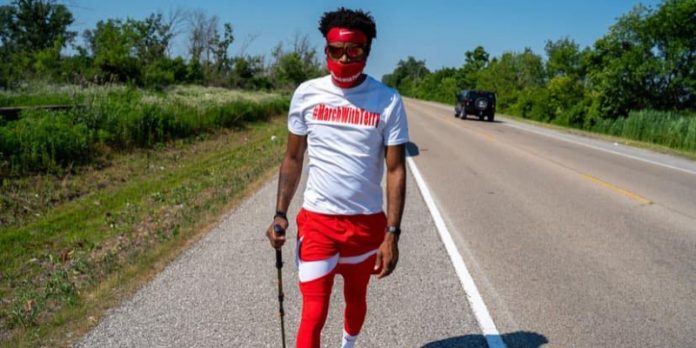 
A man from Alabama’s Rocket City completed last week a 1,000-mile walk from his hometown to Minneapolis, Minnesota, in honor of George Floyd and the larger struggle for racial equality in America.

Terry Willis has used the publicity from his march to help raise tens of thousands of dollars via a GoFundMe page. He says the funds will go towards helping him start an organization he wants to call The Dal House that will teach individuals with a criminal history a trade so they can provide for themselves.

The walk took Willis more than one month from the time he set out until its conclusion on Sunday.

Many Americans began to join Willis for sections of his walk as he gained attention over the weeks. A Facebook page called 1K Mile March that serves as Willis’ personal blog has accumulated over 40,000 followers.

Once he reached his destination in Minneapolis on July 12, Mayor Jacob Frey brought forth an official proclamation that made that date “Terry Willis Day” in the city.

Willis’ walk has drawn attention from national outlets in America and even international organizations like the BBC and a newspaper in Milan, Italy.

“I’m marching for change, justice and equality because I’ve been there before. I’d like to do my part by joining the fight for my brothers and sisters across this country starting with George,” wrote Willis on Facebook.

Henry Thornton is a staff writer for Yellowhammer News. You can contact him by email: [email protected] or on Twitter @HenryThornton95