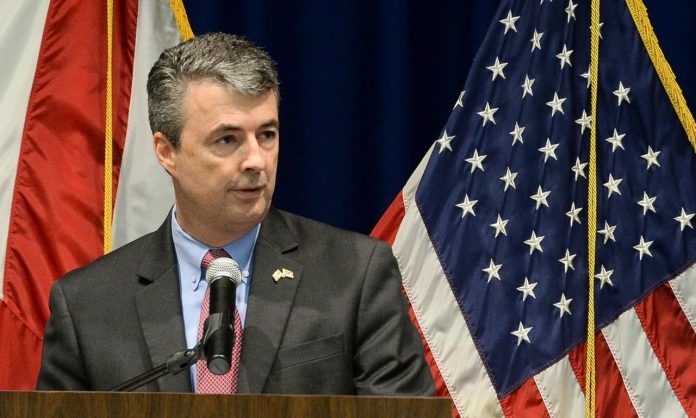 
This is an opinion column.

So what are you going to do now, Steve Marshall?

A week ago, when the City of Birmingham began removing its Confederate monument from Linn Park, the Alabama Attorney General’s office responded quickly and decisively, suing Birmingham — again — under the state’s Memorial Preservation Act.

Let’s be clear how quickly Marshall acted — when his office filed the lawsuit, the base of that monument was still there in Linn Park. Contractors weren’t even done removing it yet.

But here’s the curious thing.

Before the sun rose last Friday morning, the City of Mobile removed a 120-year-old statue of Raphael Semmes, the commander of the CSS Alabama among other ships in the Confederate navy. Semmes was unrepentant after the Civil War and defended his service in it.

Mobile’s statue came down four days ago — but still no lawsuit from the Alabama Attorney General’s Office.

Weird, huh? You can’t help but wonder what makes these two things different.

Marshall has said it isn’t clear to him yet whether the removal of the Semmes statue is permanent and he’s gathering more information.

But if Marshall is strictly following the letter of the law, there’s no exception in it for temporarily removing a monument or obstructing it from public view. In fact, there’s legal precedent here for enforcing the law against cities even when a city’s actions are temporary measures — Steve Marshall v. the City of Birmingham.

Marshall brought that first lawsuit in 2017 after Birmingham built plywood barriers around its Confederate monument while the city considered what to do with it permanently. At the time, Marshall’s office argued that the city could face fines of up to $25,000 a day for obscuring the statue from public view; however, the Alabama Supreme Court later disagreed and said the law allowed only a one-time fine.

Regardless, Mobile and its white Republican mayor and Birmingham and its black Democrat mayor are being treated differently. And this isn’t the first time Marshall has singled out the Birmingham mayor. Last month, Marshall sent Woodfin a testy letter after the city approved an ordinance requiring citizens to wear face masks during the coronavirus.

In a recent appearance on a local talk radio show, Marshall called removing the monuments capitulating to “mob rule” and he pondered what might happen if George Soros were to pay all the one-time fines of cities and other entities that chose to remove their edifices to the Confederacy.

What Marshall calls “mob rule,” black citizens in those places might call “democracy,” and when speaking in coded language, why not throw in some less-than-subtle anti-Semitism as well by name-dropping the right’s least favorite Jewish billionaire?

But if Marshall thinks he can look the other way in Mobile or give the city some slack until things blow over, he’s got another thing coming.

On Monday, the University of Alabama removed plaques on campus honoring its Confederate alumni, including one from a monument. The university was clear in a statement that the measure is not temporary and a subcommittee of the board of trustees will decide what to do about the names of campus buildings next. (The monument bill prohibits renaming such buildings, too.)

How many universities, cities and counties is Marshall ready to sue?

Marshall is boxed in, caught in a trap of his own making. His options are limited and none of them work for him.

1. He can selectively prosecute black mayors in black cities, get destroyed in federal court and be branded a bigot.

2. He can drop the lawsuit against Birmingham, admit he was wrong to bring the first lawsuit, and get blasted by Confederate apologists for surrendering the South all over again.

3. Or he can sue everybody and incur blowback from civic and business leaders who are increasingly opposed to having these things in public parks.

There’s no clear way for Marshall to win here, but he can damn sure lose. He can go down in history with those who chose politics over justice. And he has no one to blame for his predicament but himself.

The Alabama monuments bill has become Marshall’s Lost Cause.

Kyle Whitmire is the state political columnist for the Alabama Media Group.