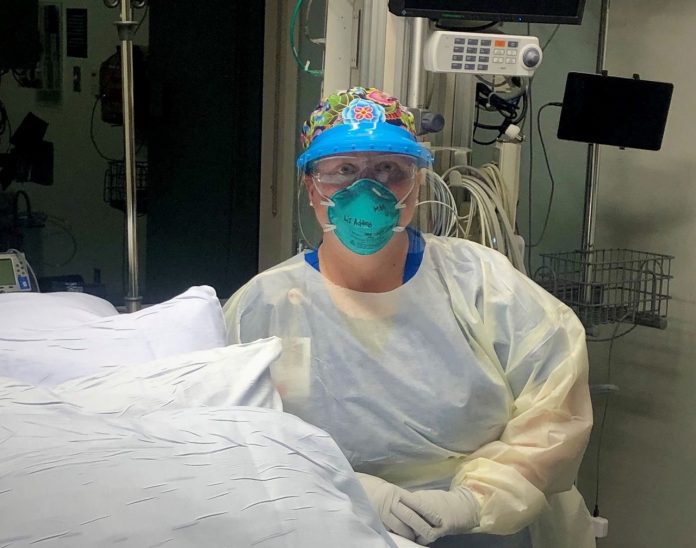 
Liz Adams drove her Honda CR-V home to Huntsville from West Virginia on March 15, feeling unsettled. Her year-and-a-half gig as a travel nurse had just ended, and she was still grieving the loss of her father, who had died less than a year earlier in August 2019. Nothing felt right.

Nationwide, things were also growing unsettled. The day after she arrived home, Alabama closed its schools and many businesses, as the COVID-19 epidemic reached crisis proportions in larger cities in the Northeast and Northwest.

Adams, who’d spent nearly a decade as a nurse at Huntsville Hospital, reached what felt like the obvious conclusion.

“I thought, I’m not working right now, I’m a critical care nurse of 9 years; I’m the perfect person to go and help,” she said.

“It felt almost like a calling, because I literally could not be in a more perfect situation.”

She tried not to think too much about the risk, she said, as she called the travel nursing company. She signed a contract a few days later and packed her bags for the 1,100-mile drive to Boston.

“Normally I would have been absolutely freaking out,” she said. “But since all that happening with my dad, I’ve been lost. This actually felt right, like something that mattered. I had no idea what kind of experience it was going to be.”

Adams has spent the past several weeks working in a COVID-19 intensive care unit at Massachusetts General Hospital. Known locally as Mass General, it’s the largest teaching hospital at Harvard Medical School in Boston and one of the oldest hospitals in the United States.

Because her unit cares for some of the sickest patients, she said, most who come to her unit do not survive. Those that do are on ventilators for weeks and require major interventions like tracheotomies and feeding tubes.

“They don’t even look like the same person,” she said. “Once COVID gets to that point, it’s absolutely one of the most horrific things, what it does to the body. I can’t think of another type of illness that’s anything like what COVID does.”

Her unit used to be a burn unit, she said, until it was flipped to care exclusively for the hospital’s sickest COVID patients. Adams is one of several travel nurses there, she said. All of the patients in her unit are on ventilators.

She was originally hired to work four weeks, but her contract was extended six weeks. Earlier in her stay, the hospital struggled to address a shortage of ventilators and protective equipment as Massachusetts health officials issued devastating guidelines about how to choose which patients could receive ventilators.

This week, there are more than 300 COVID-19 patients at Mass General, she said, and more than 100 in intensive care.

“That’s actually better than before,” she said. “Our curve is starting to flatten up here.”

For comparison, UAB Hospital in Birmingham has around 40 COVID-19 patients this week, with a smaller fraction on ventilators.

Most people who are infected by the coronavirus will never need hospitalization. But that can make it difficult to grasp the severity of the disease, Adams said.

“Personally, I have a very hard time when people compare it to the flu,” she said. “The reason the two get compared is because they cause pneumonia and that puts patients in acute respiratory distress syndrome, which is a stiffening of the lungs. Very bad and very hard to manage.

“But there are so many other things going on with COVID besides that, once they get to that state. It’s just horrific. I don’t know another word for it. It’s devastating to the body.”

She cares for one or two patients per shift, which includes managing multiple medications and IV drips, attending to the patient’s personal hygiene, adjusting ventilator settings and turning patients in their beds.

“There really is no normal to my day,” she said. “It’s just managing the chaos. Last night at work was maybe my worst night, as far as my sanity level. I don’t think one of us nurses sat down all night.”

One of the hardest parts of her job, she said, has been helping families talk on speaker phone or via Zoom calls to loved ones who are on ventilators and aren’t conscious.

“Hearing family members (telling a loved one) they’re sorry for something they said that they regretted, or that they didn’t get along, hearing those things and being part of that is hard,” she said. “They just want an opportunity to say it because they know they’re likely not going to get a better opportunity.”

But she’s also seen patients finally come off ventilators and leave her unit for a less intensive step-down unit.

After they wake up, she said, sometimes they ask what happened.

Adams lives in a hotel room in downtown Boston, near the Charles River. Often, she’s so tired that when she comes back to her room, she prepares her things for the next day and then falls into bed.

Hotel staff don’t clean the rooms of the travel nurses, over fears of infection, she said. When she needs to vacuum the room, staff leave a vacuum cleaner outside her door.

But when she does have the day off, she likes to walk around downtown Boston. She’s enjoyed seeing sights like the Boston Common and Fenway Park with some of her fellow nurses.

She even found the same kind of Southern hospitality in Boston she’s used to finding in Alabama. Her unit at the hospital feels like a big family, she said. One of her fellow nurses has a fiancée who cooks meals for them once a day.

“I don’t know how to put into words how kind and warm the people of Boston have been,” she said. “It was instant acceptance. It was amazing.”

Before she arrived in Boston, Adams admits she didn’t truly understand how devastating the coronavirus epidemic had become.

“I was skeptical of some things, but learned very quickly that this is serious and this is real,” she said.

Boston alone has more than 9,000 confirmed cases of COVID-19, more than the entire state of Alabama, which had about 7,000 as of Thursday. It can be hard for people in a state with fewer cases to comprehend the enormity of the problem.

“My concern for Alabama, based on what I see people posting on Facebook, is the lack of awareness and not taking something like this seriously,” she said. “That’s what scares me more than the virus.”

She’s been chronicling her experiences on Facebook, and was interviewed for a recent Boston Globe article.

“I want people to know I’m not trying to be dramatic or exaggerate things,” she said. “I want to give enough information so people understand these things are true and they are real.”

But as she’s seen some skepticism from acquaintances back home, she’s also experienced tangible support.

A North Alabama sewing group on Facebook saw one of her posts and shipped 280 homemade surgical caps to her, so she could share with her fellow nurses. On Wednesday, she received a shipment of 70 masks from another Alabama group.

“People in Alabama have been really generous in showing their support, and (the staff in Boston) can feel it up here,” she said. “It made quite an impact. They kept thanking me, and I was like, it wasn’t me, I just carried in the box.”

Adams’ last day at Mass. General is May 16. After that she’ll pack up and head back home.

Adams grew up in southeast Huntsville and later graduated high school at Lee High. She’s looking forward to seeing friends, going to church, eating wings from Baumhower’s and, she hopes, catching a Trash Pandas game. Alabama has a "safer at home" order through May 15 that might put some of her plans on hold.

She’s also ready to return to work at Huntsville Hospital with a renewed sense of purpose.

“I feel like coming up here (to Boston) has brought me back to life,” she said. “I was kind of empty, ever since my dad; I’d never had to grieve before, it’s not fun. But this whole thing has changed me. I feel like I’m serving a purpose here, and it’s brought the opportunity when I come home to ultimately better serve our community.”

She’s concerned about a potential “second wave” of COVID-19 cases in the fall, as some experts, including those at UAB, have predicted.

“I hope Huntsville never sees what I am seeing here,” she said. “Never. But I do think there’s a potential that we haven’t gotten over the worst of it. I hate even thinking that, but we have to be prepared. And I want to be able to serve my community in that regard.”