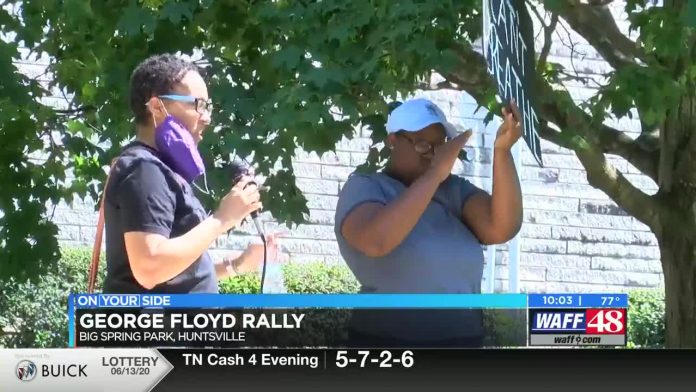 
HUNTSVILLE, Ala. (WAFF) -Standing side by side in solidarity, dozens of people filled Big Spring Park to help fight against social injustices both locally and nationwide.

They traveled from Birmingham after learning about the protests on June 3rd, when law enforcement used tear gas to break up some of the protesters.

“People say why are you doing it? Well, systemic racism has been a thing for a long time and now it’s to the point where it has to be known and it has to be brought down," said Curry.

He said it was a moment of hope and a step in the right direction to see so many people be able to voice their concerns.

During the rally, guest speakers voiced their concerns, prayed for unity within in the community, and some had the opportunity to register to vote.

“The younger people have been told our votes don’t matter and seeing how we were treated last week and seeing how my citizens and neighbors were treated last week just reminded us how important it is to vote. The people in charge, the authority figures I believe are not doing right by their citizens, so it’s an important thing to keep everybody accountable to register vote and vote when it comes time," said Emma Steelman, voter registration organizer.