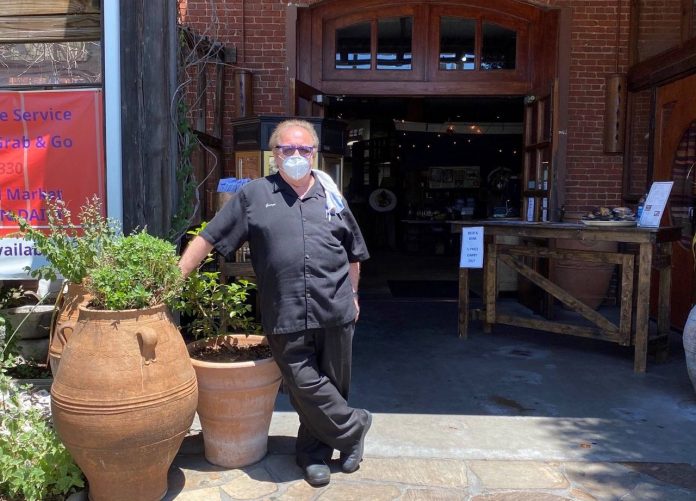 
Alabama opened in ways Monday, tentative and halting and with varying degrees of enthusiasm.

At the Fish Market in downtown Birmingham, where George Sarris has held court for 37 years, the restaurant opened for lunch, but served only about a dozen customers in the first two hours, he said.

They ate off plastic plates, with individually wrapped condiments, on tables clean but far apart. It was dining out, but he admitted it lacked the typical “vibe.”

Is it worth it? Is it worth opening at all to serve at 50 percent capacity, to a worried clientele and a world that may or may not be ready to gamble on its new normal?

“To tell you the truth, no,” Sarris said. “But you have to jump in the ocean sometimes to test the water.”

That’s what people and businesses did from Tennessee to the Gulf on Monday. They tested the waters, with varying degrees of comfort.

Activity in downtown Birmingham remained sparse, as it has for weeks. Birmingham’s Railroad Park, in normal times a beehive, was all but empty Monday morning, save for a personal trainer, an athlete running cones and a few joggers, most of them unmasked.

Jefferson County was an early hotspot for the virus, and initiated restrictions to flatten the curve and limit the spread of coronavirus. As of Monday it had recorded 1,123 confirmed cases, and 61 known deaths. Health officials there cautioned against backsliding, and recommended limiting gatherings of more than 10 people for another two weeks.

Mobile County – with few identified cases early in the pandemic – has surged past Jefferson in both confirmed cases and deaths. By Monday, it had reported 1,465 cases and 90 deaths, by far the most in the state.

Residents and business owners there were both hopeful and cautious this week, eager to hop back into a sense of normalcy, but worried about financial viability under regulations that exclude half of occupancy. Some restaurants, including the renowned Wintzell’s, are not ready to open at all. Others approached Monday with one eye on the balance sheet and one on the virus itself.

“Nobody is taking this thing lightly,” restaurateur Pete Blohme -- he is known as “Panini Pete” in South Alabama and owns four restaurants in Mobile and Baldwin counties -- said in a video he posted on Facebook to talk about the reopening.

Restaurants are able to control their environments much easier than other retail venues, he said. They can control where patrons sit and how far apart they remain, among other things. These days Blohme will serve them with minimal staff and limited ingredients.

“We’re going to keep the crew safe, the public safe as we move to a new phase,” he said.

The mood in North Alabama, which has largely been spared from epidemic, was a little less cautious, but not exactly carefree. Madison County has confirmed a total of 247 cases and only four deaths from coronavirus – a 10th of those in far-smaller Tallapoosa County in south-central Alabama.

Many residents in Madison County seemed eager to shop and to dine out, but even there it was unclear if they are so ready that they will embrace reopening in large numbers. Redstone Arsenal remained largely shut down, so it is all but impossible for the rest of Huntsville to reopen.

Huntsville Mayor Tommy Battle has urged “personal responsibility,” and encouraged residents to stay home if they don’t feel comfortable. He warned a few days ago that reopening will likely “be a slow build.”

Pressure to “reopen the economy,” as the politicians have come to call it, has grown steadily in recent weeks, even as the 14-day moving average of coronavirus cases in Alabama has largely trended upward. The number of cases on May 7 – a day before Gov. Kay Ivey loosened the restrictions – was the highest day yet for coronavirus confirmations.

The state has now passed 400 deaths from coronavirus, and is poised to cross the 10,000 count for infections.

In Birmingham, Sarris will do all he can. He continues to serve the diners who want to eat in, and still offers curbside pickup. He wishes, though, that Alabama had waited another week before leaping into the water.

“I told somebody it’s like we’re on the Titanic and we are going down and the government has all the life jackets,” he said. “They keep telling us ‘We’ll give them to you soon.’”

It makes it hard to step right back in, because every level of government has given assurances and orders, and most have quickly changed them.

“The West Wing has the virus and doesn’t wear masks, but tells us to wear masks,” he said. “It is crazy. I feel like we’re doing all this by the seat of our pants.”

That’s what bothers him most as Alabama tries to rush toward reopening. He doesn’t know who to believe, and he doesn’t think the politicians know either. Few of us do. So facing financial or public health catastrophe, we rush to save ourselves. Or – depending on who you trust -- just the opposite.

“Half of us belong in an asylum,” he said. “I’m just not sure which half.”