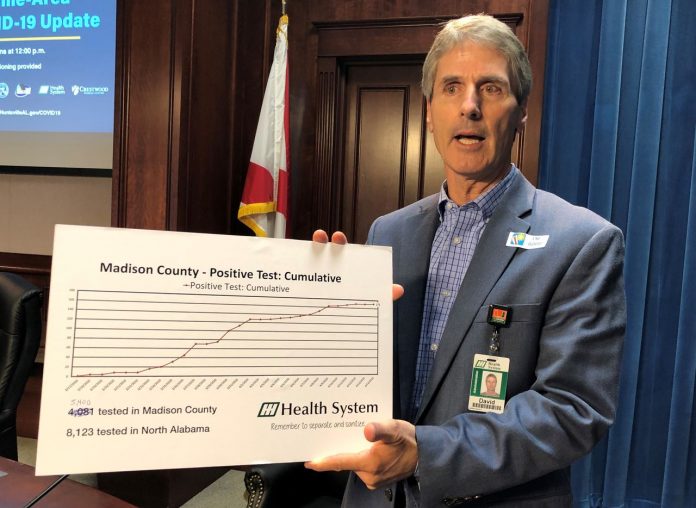 
As Alabama works through the process of reopening the state, Huntsville Hospital CEO David Spillers said Thursday that masks need to be a mandated part of the equation.

Wearing masks should be part of a new normal because the novel coronavirus won’t instantly disappear, he said.

“There has been a lot of conversation about opening up the economy and I think when we see that, I certainly hope that one of the recommendations that comes from the state when we open back up is a requirement to mask,” said Spillers, who oversees medical centers within the Huntsville Hospital System throughout north Alabama. “I think everybody in a store buying a product should be masked.”

New York, Pennsylvania, Maryland and New Jersey have required wearing masks in public. So has the city of Los Angeles.

in Alabama, Gov. Kay Ivey has established a task force to lay out a plan for relaxing the stay-at-home order that extends through April 30. The state has been under her shelter-at-home order since April 4. The state closed businesses deemed non-essential. Businesses that are permitted to operate are monitoring capacities and encouraging social distancing.

Masks are already required for everyone in Huntsville Hospital, Madison Hospital and Huntsville’s Crestwood Hospital. Madison Mayor Paul Finley said that wearing masks may eventually be required for entrance to city hall.

The nationwide guidelines for reopening the economy from President Donald Trump on Thursday called on states to “strongly consider wearing face coverings while in public.”

"I think more people need to be wearing masks," Spillers said. "It hasn't become habit yet. I'm guilty. I left it in my car and had to go back and get my mask. We just have to do it enough to make it a habit. I'm seeing a lot more homemade masks, which are great.

“Whatever it takes to get people to wear a mask, the more people who wear masks, the better off we are. Hopefully people will continue to get masks and comply with that.”

The availability of surgical masks or N95 masks has been an issue but homemade masks meeting certain criteria have received approval from the CDC. While those masks are not considered protection from being exposed to COVID-19, it is protection from spreading the virus yourself.

"I think up until now, it's been hard to require people to do that because of the availability of masks," Spillers said. "But I think going forward, everybody will have masks. We talk a lot about the new norm – the new norm being very different from anything we've dealt with in the past. I think we've all got to get used to some changes."

Finley pointed out that when the coronavirus first hit the U.S., social distancing was not yet realized as a defense and now it's become a household term. The same could go for wearing masks.

Meanwhile, Spillers said that the number of people testing positive for COVID-19 in Madison County has slowed to the point that the area is seeing a flattening of the curve. Spillers displayed a chart that indicated the Huntsville area has slowed the spread of the virus without seeing what the medical community feared was a spike in positive cases that would strain – if not exhaust -- hospital resources.

The chart still reflects an increase in positive tests administered by the hospital but the rate has slowed to the point that the upward trajectory has leveled off since April 1. After going from no cases on March 17 to about 130 in less than two weeks on April 1, hospital-administered tests have gone from about 130 to 171 since April 1.

The Alabama Department of Public Health has Madison County with 198 confirmed tests overall. Spillers said that a small number of testing has been done beyond the auspices of the hospital to account for the additional cases.

As Spillers pointed to the flattening, however, he said it's always subject to change.

"All it takes is one large social gathering," he said. "That's why, as good as the numbers look, we can't let our guard down. We have to keep doing the things we're talking about doing or the positive direction we're going won't be that."

On Wednesday, Dr. Pam Hudson, CEO of Crestwood Hospital, also cited gains made in the fight against the virus.

"We're on solid track to claim success to flattening the curve," she said. "That doesn't mean we have beat COVID. It just means what we're doing is working; what you're doing is working. It also means the number of cases we are seeing that need hospitalization are well within the capabilities of your hospitals."

On Thursday, Spillers said there were 8 coronavirus patients hospitalized in Madison County and another 10 patients throughout the hospital system in north Alabama.

“Relative to our population,” he said, “those are very small numbers.”