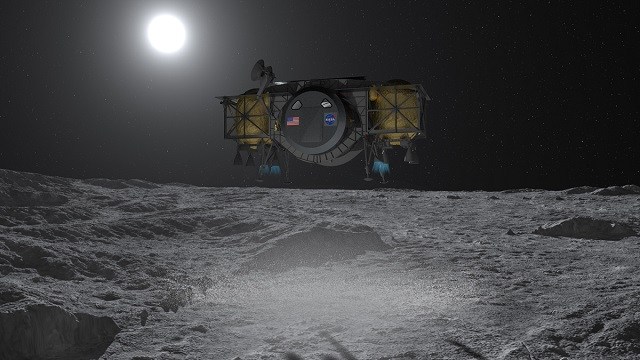 The research contracts represent “the crown jewel” in the Trump administration’s effort to return astronauts to the moon by 2024, Doug Loverro, the U.S. space agency’s associate administrator for human exploration, said Thursday. Dynetics, an Alabama-based subsidiary of Leidos Holdings Inc., also was a winner.

“There’s really no more exciting mission than delivering humans to other planetary bodies,” said Kim Doering, Dynetics vice president of Space Systems. “However, it’s also among the most challenging endeavors, particularly given the goal of landing on the moon in 2024. We believe Dynetics has the recipe for success.”

The lander’s development is a crucial missing link in the National Aeronautics and Space Administration’s Artemis moon program. The contractors will work on their designs through next February, when NASA will evaluate which will perform an initial demonstration mission. The contracts total $967 million for the first 10 months of work on the lander, which will ferry astronauts to and from the moon’s surface.

“This is the last piece that we need to have to land on the moon,” NASA Administrator Jim Bridenstine said on a conference call with reporters.

With Dynetics based in Huntsville (and working with partners like Decatur’s United Launch Alliance, Huntsville’s office of L3Harris Technologies and Tuskegee University) along with Blue Origin’s Huntsville presence and Marshall Space Flight Center’s role as the lead center for the project, the moon mission may be taking on an Alabama flavor.

Dynetics is working on a “single structure” system to land on the moon. Its vehicle would be sent aloft on the Space Launch System, a new heavy-lift rocket that Boeing Co. is building for NASA’s future deep-space exploration missions. Boeing was among the bidders not selected to develop the lander.

Blue Origin’s team includes Lockheed Martin Corp., Northrop Grumman Corp. and Draper, an engineering and avionics firm. Bezos’ company is developing rockets and vehicles for space tourism, as well as deep-space missions such as those for NASA. The group envisions a three-stage lander system.

“Going to the moon is why we got into this business and we couldn’t be more excited,” Blue Origin Chief Executive Officer Bob Smith said on the NASA call.

SpaceX will refine its Starship vehicle, which is also in development, as a fully integrated lunar landing system.

Referring to the lander on the call, Musk said, “We look forward to providing the [lander] capability and potentially a lot more over time.”

(Alabama NewsCenter contributed to this report. Contact the reporter at [email protected].)