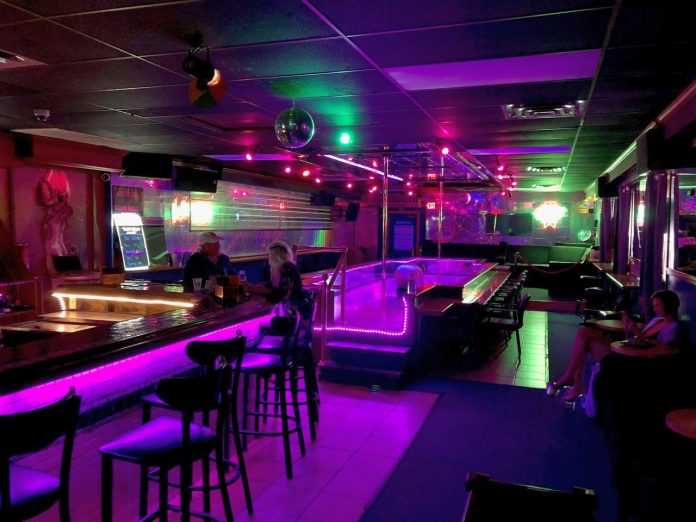 Music pounding in the background, the bar manager had trouble hearing on a phone call.

It was a little before 5 p.m. Wednesday and The Gentleman’s Club in Attalla was certainly open for business in the age of coronavirus. The establishment in Etowah County is one of several strip clubs that reopened in the past week, before legally allowed. That moratorium ends at 5 p.m., Friday under Governor Kay Ivey’s updated orders announced Thursday that relaxes restrictions on entertainment venues including bowling alleys, water parks and strip clubs.

From Attalla to Wesley’s Boobie Trap near Dora and Diamonds Exclusive Men’s Club in Mobile, the lockdown ended early. And none operated in secret. Active Facebook pages are posting photos and memes promoting their premature return. Others like Scores in Huntsville announced a Friday restart Tuesday while Sammy’s in Birmingham posted a “We’re back!” Facebook photo immediately following Ivey’s Thursday announcement.

So … how does this work?

For businesses, let’s say, built around the absence of social distancing, the coronavirus pandemic creates quite a conundrum.

“Everybody stays six foot apart and we only seat a couple to a table, and they have to be with the same group,” said the manager who answered the phone at The Gentleman’s Club but declined to give her name. “They have to come in together.”

The lifeblood of the adult establishments doesn’t exactly come with six feet of separation. Answers there were more in the gray area. A man answering the phone at Empire Gentleman’s Club in Birmingham said they were open, but lap dances were not available. Photos posted to the club’s Facebook page showed bartenders with masks but large crowds around the bar with unmasked patrons.

“I don’t answer questions like that,” said a manager at The Gentleman’s Club when asked about lap dances. “I’m sorry.”

A woman answering the phone a day earlier said lap dances were, in fact, being offered. That changed when an AL.com reporter identified his affiliation on a Wednesday call.

She referred any further questions to owners.

“You’d have to come in here and talk to him directly,” she said. Etowah County has seen 223 confirmed cases, according to the Alabama Department of Public Health, and 10 virus-related deaths.

The lap dance question wasn’t something the general manager of Scores in Huntsville could answer.

“That … I don’t know,” said the general manager who also didn’t want to give his name. “That’s not up to me.”

Who makes that call?

“That would be up to either the regional supervisor or the owner if they want to go down that road,” the general manager said. “Like I said, I know we’re going to be doing quite a bit of social distancing in the bar, at the bar itself and around the stage as well as sanitation. But as far as any distancing and dances being available or not, I don’t have that answer.”

The general manager said they’d be taking temperatures at the door while more than half of the club’s seating has been removed.

“We’ll have hand sanitizer available all over the club, continuing sanitation,” he said. “We’ll clean every hour. We’ll go around and clean every door handle, every door surface, every touchable surface, things like that will be cleaned regularly. We’re going to be very cautious and try to keep everything clean and distanced.”

Scores is located in Madison County, the third most populous in the state with the third lowest rate or positive tests. Only 80 per 100,000 residents have tested positive (285 total) with four deaths.

Diamonds in Mobile announced its reopening last Friday on Facebook, noting it will be doing temperature checks for guests, staff and entertainers. Mobile County has the most positive COVID-19 tests (1,822) and deaths (106) despite having 245,000 fewer residents than Jefferson County (1,433 positive tests and 83 deaths).

These issues aren’t unique to Alabama. A strip club in Bakersfield, California opened earlier this week only to be shut down by the county public health department, KGET-TV reported.

And in South Florida -- arguably among the nation’s live entertainment capitols -- the Sun Sentinel reported on uncertainty among club owners. Gold Club Pompano general manager Sean Bishop wasn’t among them.

“Guys have been rolling dice with hookers ever since the beginning of time,” Bishop told the Sun Sentinel. “We’re idiots when it comes to sex.”

Questions remain in Alabama. Among them: How they could strip clubs open when they were clearly listed on the restricted list on the governor’s May 8 safer-at-home order.

“I’m a manager and I do not know all of the business part of what my owner does,” said the unidentified manager at The Gentleman’s Club. “So, I can’t answer questions like that. I’m sure he’s following all guidelines.”

A social media user took the question straight to the source on The Boobie Trap’s Facebook page. In response to a May 8 announcement of the club’s reopening, the user posted a screenshot of the governor’s order that lists adult entertainment venues among those not permitted to reopen.

“sorry but we are a bar,” was the reply from the Boobie Trap account that has 1,181 followers. Nobody answered the phone when AL.com called multiple times this week.

It would be up to local police or sheriff’s departments to enforce the governor’s safer-at-home order. There’s a $500 fine for violating the health order.

The amended order released Thursday doesn’t break the dam for a free-for-all in strip clubs. Crowds can’t exceed 50 percent of capacity and employees “shall not knowingly allow” customers to gather within six feet of each other.

A two-page supplement with guidelines for newly reopened entertainment businesses didn’t specifically address those of the adult variety.

It’s unlikely lap dances would get the green light from the Alabama Department of Public Health just yet.