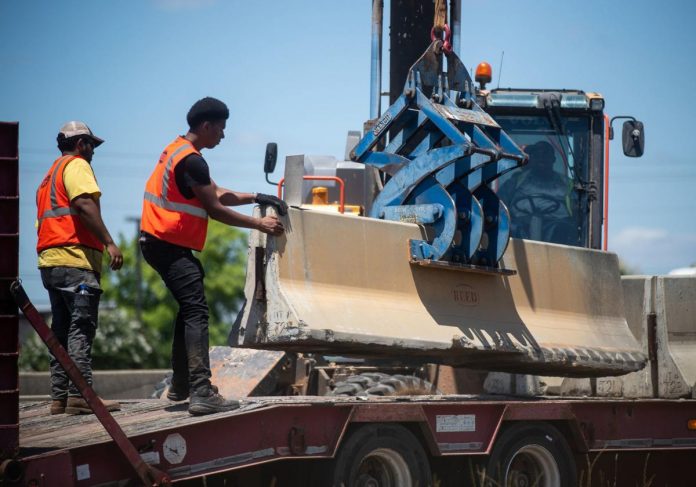 
The Greenbrier exit on eastbound Interstate 565 is expected to open Wednesday, according to the Alabama Department of Transportation, just as a project to widen I-565 begins.

At lunchtime Monday, the employees at the Chevron and Fuel City convenience stores on Greenbrier Road were busy dishing out chicken, burgers and burritos from the delis, but the stores’ owners said business has been way down since Exit 3 was closed.

G.P. Patel said he has seen his business drop between 50% and 60% in the past 18 months because of the exit’s closure for interchange improvements aimed at improving traffic flow for the Mazda Toyota Manufacturing USA plant being built near the exit.

“Exit 3 should be open sometime this week, most likely Wednesday,” he said.

However, Burkett said beginning Wednesday night, the eastbound on and off ramp at Exit 2 (Mooresville Road) will be closed for about a month.

“As the I-565 project is starting, the interchange modifications project at Exit 3 (Greenbrier Road) is almost complete,” he said. “Eastbound motorists can use the Greenbrier exit and take the service roads to access Mooresville Road.”

He said crews were busy removing concrete barriers at the exit Monday morning and will move them to the Mooresville exit for the I-565 widening project that will take about 18 months to complete.

He said motorists should see a “pretty minimal impact” from the road work. He doesn’t expect any delays during the day as Reed Contracting of Huntsville will be doing most of the work from 6 p.m. to 6 a.m.

“Two travel lanes will remain open in each direction during the widening,” Burkett said. He reminded motorists that the speed limit along I-565 drops from 70 mph to 55 mph and speeding fines are doubled when crew members are present. He warned motorists that some lanes could shift during the process.

The project will resurface about 6 miles of I-565 from just west of Exit 1 (Interstate 65) to just west of Exit 7 (County Line Road). Much of the widening will use existing shoulders to expand the highway to three travel lanes in each direction, Burkett added.

He said Reed will be incentivized to complete the road project prior to Dec. 17, 2021. He said the company will receive $25,000 a day the project is completed ahead of schedule up to a maximum of 50 days and $1.25 million.

The manager at Fuel City, Yogesh Patel, said a couple of months ago, business was even more crippled because of the governor’s stay-at-home order that kept residents from traveling as much.

“The COVID-19 pandemic has hurt a lot, too,” said Yogesh Patel, who has been manager for nearly six years. “After lunch, we have a few people in here for snacks and fuel but nothing like business was a few years ago. People traveling east toward Huntsville can’t get off here.”

The majority of the customers lined up at the deli were construction crews from the nearby Mazda Toyota plant.

“The exit being closed has been a little bit of a hassle,” said Scottsboro’s Eric Frazier, an employee with Miller & Miller Construction Co., which does bridge and culvert work. “But that is expected. We’ll all be glad when it opens back up.”

Mazda Toyota will eventually employ 4,000, according to plant officials.

G.P. Patel is guardedly optimistic about a boom in his business, but he pointed across Greenbrier Road at another store being constructed.

“It won’t be all good. We’ll have competition,” he said.