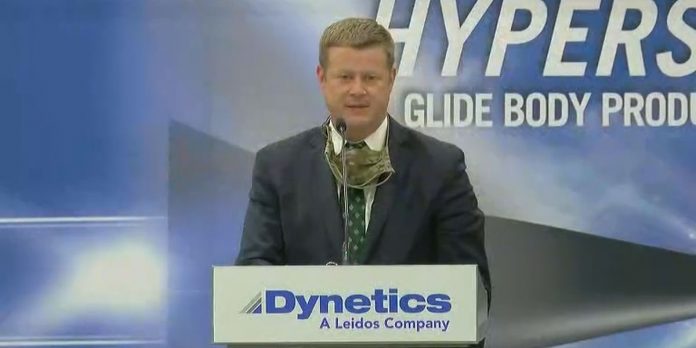 
HUNTSVILLE, Ala. (WAFF) - The secretary of the U.S. Army is in Huntsville and promises that the Army will be central to developing and distributing a vaccine by late fall.

Army Secretary Ryan McCarthy said in 120 days, the Army will be delivering those advanced therapeutics - at scale - to the American people.

His comments Wednesday were at the soon-to-be open Dynetics hypersonic missile facility at MidCity in Huntsville. He toured the facility and spoke about the weapons it will be producing.

Hypersonics are the next-generation weapon for the warfighter, and Dynetics is putting $351 million into producing that mach 5 firepower here in the next three years.

“The U’S. Army, Navy and Air Force are investing billions of dollars over the next five years to rapidly produce and scale hundreds of these missiles to outfit in our formations all over the world. It is a capability to make sure that we have the technical margin on the battlefield for decades to come. The work you do here will affect our future,” McCarthy said.

“It’s relevant in this day and time because of the threat by our adversaries. We have adversaries who have advanced hypersonics and we are behind the power curve and we need to catch up. That’s why it is so relevant now and why we are on such a fast timeline so we can catch up to our competitors,” said Dynetics hypersonic program manager Paul Turner.