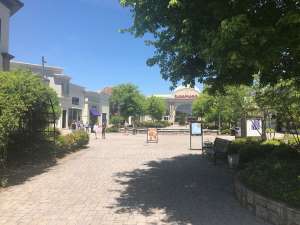 
As malls in Huntsville reopened today after being shuttered for more than a month because of the coronavirus pandemic, shoppers said they were surprised and disappointed to find most stores remained closed.

Retails stores in Alabama were allowed to reopen beginning at 5 p.m. Thursday when Alabama’s Stay-At-Home order ended and was replaced by a new Safer-At-Home mandate. But some malls — including Bridge Street Town Centre and Parkway Place in Huntsville — waited until today to welcome back customers. And some of their largest retailers remained closed.

It was quiet inside Parkway Place, Huntsville’s traditional-style shopping mall off Memorial Parkway, just after the 11 a.m. reopening. Some corners of the mall were dark, as major retailers like Belk and Dillards did not reopen.

Cynthia Doub and Leigh Fling were among the first people to shop at the mall. Without the crowds that typically formed during the pre-pandemic days, Doub and Fling made their purchases and walked outside by 11:30 a.m. Clutching shopping bags, Doub and Fling — both Huntsville servers who are out of work because restaurants and bars are still closed — said they bought new sandals and work shoes for when they return to their jobs.

But, Doub said she was “disappointed” by how many stores were closed. Fling nodded her head in agreement.

“I was really hoping we could get in early, right after everything opened and beat the crowds,” Doub said. “But there’s not many stores open.”

Fling said she was surprised to see so many people shopping without wearing masks.

Also, elected leaders and public health officials are encouraging people to wear masks while shopping or during other public activities.

[Related: What’s the right way to wear a face mask? No-sew way to make your own3/8

The state health order allowing retail stores to reopen restricts occupancy to 50 percent and requires adherence to social-distancing guidelines, such as maintaining six feet between people.

Because so few people were inside the mall this morning, Fling said, maintaining distance wasn’t a challenge.

Embrel Vaughn said he felt a “sense of freedom” being back at the mall, but said it was a strange experience being inside the quiet, sparsely populated building.

Vaughn also said he was disappointed that so many stores remained closed.

“You hear the mall is opening back up and you think stores will be open,” he said.

Across town at Bridge Street, Wendi Busing and her mother, Rita Seaton, were among the few people enjoying a warm, sunny afternoon at the open-air shopping destination. Shortly after finishing a takeout lunch near the water, the women held shopping bags filled with shoes, bracelets, a candle and hand towels. Seaton said she was shopping for gifts for friends who are feeling down during the pandemic.

“We needed to be out and get some fresh air,” Busing said.

The women said they were surprised to see so few people at the shopping center.

“We were hoping the businesses would have customers,” Seaton said.

But equally as surprising was the number of stores that remained closed, Busing said. She’d hoped to be able to shop at Bath & Body Works.

The women said they felt safe at the shopping center, where they wore masks and used hand sanitizer.

Tenautica Lynch of Town Creek said she hoped arriving at Parkway Place shortly after its reopening would allow her to visit her favorite stores before crowds formed.

“But almost none of the stores are open,” Lynch said as she waited to enter a shoe store. “I like being here with fewer people and no crowds, but I’m still disappointed.”