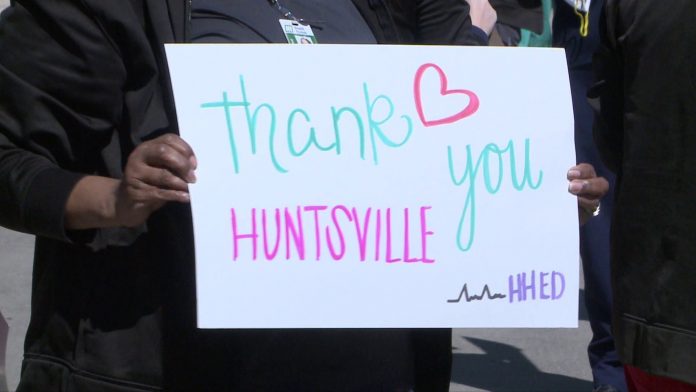 HUNTSVILLE, Ala. – COVID-19 is keeping kids out of the classroom, but it’s not stopping some from giving back to their community.

We hear a lot about heroes these days. “My brother is a firefighter and he does have a chance of like getting the coronavirus from people, helping other people,” Angie Franco said. People are risking their own health to take care of others.

Angie and other students in the Asbury High School Peer Helpers group wanted to recognize people like her brother. They came up with an idea.

Another student, Daisy Zurita said, “Why don’t we thank other people who are risking their lives to help like in the nursing home?”

“We have been giving and making cards to people in the nursing homes, people working for mail carriers and the workforce for medical,” Maddie Baker said.

They were taking time to lift the spirits of others.

Sophia Turner remarked, “We’re sending them to people who need a thank you and need people to support them.”

The students were showing appreciation for the helpers.

It’s enough to make a teacher proud. Amber Hancock works with the kids and told said, “This group did wonderful things at school before we were dismissed for the rest of the year.”

The Asbury Peer Helpers tutored, read to students, did crafts with them and raised money for St. Jude to fight childhood cancer. The notes they’re writing are from the heart.

“I just want them to know they’re doing a good job,” Landon Bethune said, “And we thank them for all they’re doing for our community and that none of them are alone.”

And the people who are receiving them are touched.

“They are so grateful for everything we have done for them so far,” Maddie Baker said. “Even if it’s just a little card.”

With the help of a teacher and a parent, the group started another project. Naomi Wyatt and her son have been involved.

“It’s been really fun,” Wyatt said, “It’s been neat that we’ve been able to make something from home that medical professionals can use.”

They’ve been printing and making face shields. Teacher Matt Harris is printing too.

“One of the wonderful things about this community is when there’s a need, we band together,” he said proudly.

They’ve delivered more than 250 to health care workers and police.

“Whatever we can do to help, we’re going to try to do it,” Harris added.

They’re taking care of those who take care of us. “It makes you feel good that you can do something for other people,” Maddie Baker said. Angie Franco added, “It feels good that you’re helping them.”

They’re socially distancing, but coming together to help and honor some of our local heroes.

“I really look forward to when we can be back together again,” their teacher said fighting back tears. “It’s really hard. I’ll get choked up. But yes, they’re a wonderful group of students.”