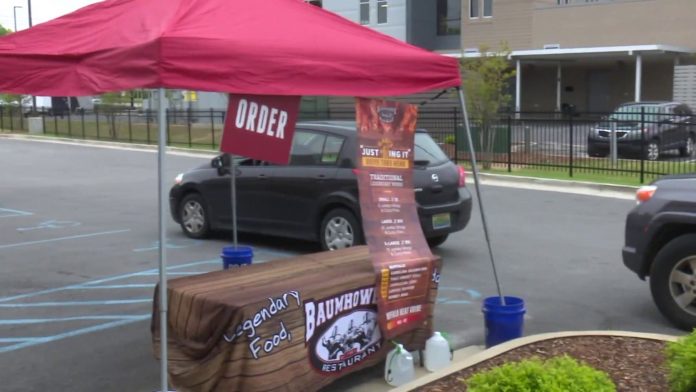 
HUNTSVILLE, Ala. – Former Alabama and Miami Dolphins offensive lineman, Bob Baumhower is literally trying to pull out all the stops to keep his doors open across the state of Alabama.

In an extensive story first reported by our news partner AL.com, Baumhower detailed his chain has started to offer grocery options to customers.

“We also have toilet paper!” Baumhower said with a laugh. (While supplies last)

In all seriousness, Baumhower thought the concept would be worth trying because they buy fresh food to supply their operation. So he thought, why not see if people want to buy in bulk? Baumhower says after seeing the supply issues at grocery stores, he decided to jump in.

“We bring in milk, we bring in bread, we bring in skinless and boneless fresh chicken. Fresh wings, tenders, and burgers,” said Baumhower.

Many of the grocery items are cheaper than you would find in a grocery store.

In Huntsville, the Baumhower’s Victory Grille sold out of their grocery stock before they even opened, Monday.

“We got about 2,000 pounds of wings. About 400 pounds of chicken breasts, tenders and hamburgers. By noon we were sold out,” said Chef Monterice Cosby.

Don’t worry, there’s an even larger order on the way. The grocery option will still be open. You can order online or via Doordash.

Baumhower hopes this new option will keep his employees in a job and the doors open when the pandemic is under control. So far, the venture appears to be working.

“The phone has been ringing off the hook since 8 o’clock this morning. They literally have not stopped,” said Chef Cosby.

The timing couldn’t be better, since mid-March, Baumhower says sales have been down between 70-80 percent. Chef Cosby says Monday was as busy as a regular day at Baumhower’s because of the grocery option.

Baumhower told WHNT News 19 that they hope to soon partner with a fresh seafood distributor to increase grocery diversity. He says the fishing industry on the Alabama coast needs help too.