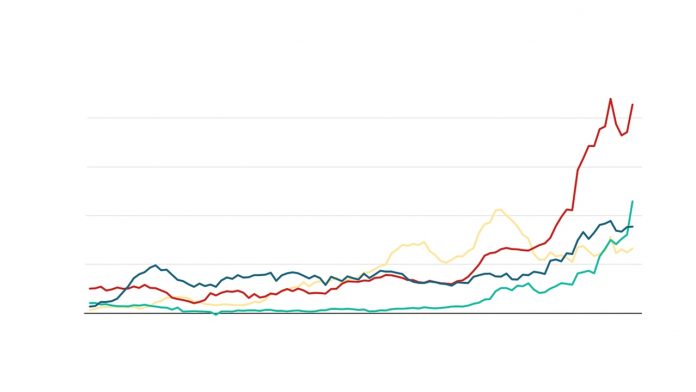 The Alabama Department of Public Health confirmed a record 2,164 new coronavirus cases in Alabama on Thursday, the first time the state added more than 2,000 cases in a single day. It’s a continuation of a sudden summer climb, as the rolling 7-day average also reached a new high on Thursday.

June was by far Alabama’s worst month for new coronavirus cases to this point in the pandemic - the state added more than 20,000 new cases during that month, more than doubling its case count.

But July is already on pace to smash that record. ADPH has confirmed more than 11,000 new virus cases in just nine days so far this month. A little more than a week into July and that’s already the second most new cases in any one month.

The state’s rolling 7-day average for new cases rose to 1,283.4 on Thursday, the highest ever.

The July cases already make up 23 percent of the state’s all-time case load. Thursday’s total of 2,164 means Alabama just saw 4 percent of its case load in one day. The state now has 48,588 all-time confirmed cases, along with 1,042 deaths.

Thursday’s huge case count is fueled by surging totals all throughout Alabama. 17 counties added a record number of new cases on Thursday, and 20 are currently at all-time highs for 7-day average.

Jefferson County, the most populous in the state and home to Birmingham, added the most new cases with 343. It’s the most in any one day in Jefferson County other than a day following a data backlog in June, which caused inflated case counts. Jefferson County’s 7-day average crossed 200 daily cases for the second time, and now stands at 214 cases per day.

Madison County, home of Huntsville, added a staggering 287 new cases, by far the most it’s seen in any single day. It’s more than the previous two high days combined for that county, and represents 15 percent of the county’s all-time virus case count. The huge jump in cases there caused Madison’s 7-day average to rise past 100 for the first time on Thursday.

Madison County had mostly avoided a large outbreak through the course of the pandemic, while Alabama’s other large counties - especially Mobile and Montgomery - were all hit. Now, Madison’s 7-day average is 114.7, higher than the average ever got at the height of outbreaks in Mobile or Montgomery.

Mobile County had the first truly bad outbreak of any of the state’s largest counties, peaking in April before flattening off for a few months. But in mid to late June, cases there started to accelerate again. The 7-day average hit an all-time high in Mobile County earlier this month at 94.6 cases per day, and now stands at 88.7.

Montgomery County also took a turn at having the worst outbreak in Alabama beginning in late May. It saw a large peak in daily cases of over 100 per day in mid June, before falling somewhat. The average there on Thursday was 66.3, the lowest of the state’s four largest counties.

As of Thursday afternoon, the state had not yet updated testing numbers.