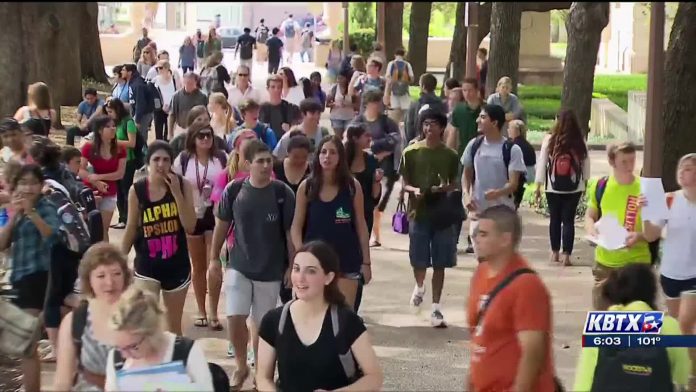 On Saturday, dozens of people gathered at the Sam Houston Statue on Interstate 45 after rumors spread it would be damaged or torn down.

HUNTSVILLE, Texas (KBTX) - The Huntsville Black Lives Matter group says social media posts over the weekend misrepresented what they are about.

On Saturday, dozens of people gathered at the Sam Houston Statue on Interstate 45 after rumors spread it would be damaged or torn down. BLM members have said on several occasions they have no issues with Sam Houston, the former President of the Republic of Texas and statesman. Houston also wanted to preserve the Union during the Civil War.

“We all as citizens of Huntsville, we are not concerned with the Sam Houston monument. I have mad respect for Sam Houston himself,” said Nia Williams, Black Lives Matter Huntsville president.

She said there was no truth to the rumors over the weekend. The city heard about a potential threat against the statue and posted a response on their Facebook page. Williams said the city’s Facebook post about the rumors made things worse.

”Considering everything going on with COVID, a large group of people with guns went out and basically surrounded the statue in order to protect it, surely just wasting time and putting people at risk because very few of them, if not one, were wearing masks,” said Williams.

“Our intention was just to respond to comments that we had received from our citizens and, you know, wanted to make sure we were aware of the rumors that we had out there. We just wanted to let them know that we’re aware of it and we’re on top of everything,” said Aron Kulhavy, Huntsville City Manager. “We made a post letting them know that we were aware of all those questions and concerns and we’d be monitoring the situation,” he said.

Some visitors at the statue Monday afternoon said they’d heard about the controversy over the weekend.

“I guess they have nothing else today, especially with the COVID and everything that’s going on. More people are looking for information but instead of doing the research they just go with whatever somebody posts,” said Wanda Williams of Cypress. She said people should be careful with verifying information online.

“I think it’s been more of a bad than good and usually when I see stuff like that I try to research it,” said Williams. ”We have to be really careful as to what we give attention to,” said Williams.

Black Lives Matter Huntsville members say the only thing they’d like to see removed is a Confederate monument from the courthouse grounds. We have our story on last month’s rally to remove the monument here.

Huntsville Police were also at the Sam Houston Statue Saturday as a precaution. They and city staff said the crowd remained peaceful and no arrests were made. Police said the people who were armed to protect the statue were legally carrying.

No one from the local Black Lives Matter chapter attended, according to Williams.