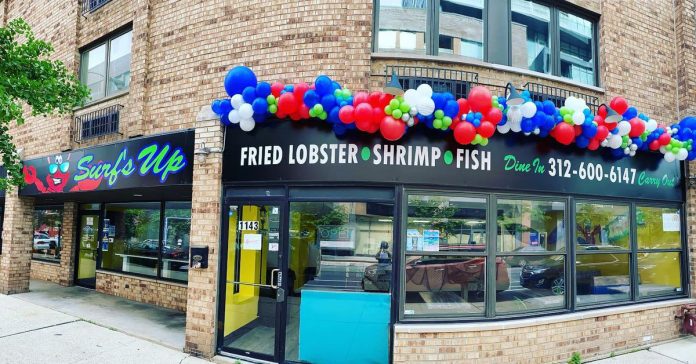 
Casual seafood mini-chain Surf’s Up opened its first location in 2012 in suburban Hillside. The business has since grown to 10 locations, mostly scattered around the South Side. The Black-owned company is expanding, and it opened its first North Side location, at 1143 N. Wells Street in Old Town.

Chicago is a racially segregated city, and often time so are its cuisines. Many North Siders aren’t aware of items like Chicago-style rib tips, the gym shoe sandwich, or sweet steak sandwich — all items that originated on the South Side. Knowing that, Surf’s Up’s ownership had been looking at North Side real estate for a while. They wanted to customers to discover specialties such as fried lobster, fried green tomatoes, and chicken wings smothered in Hennessy sauce. The liquor adds a sweetness to the sticky wings.

“I wanted to come to the North Side, I didn’t want Surf’s Up to be associated with one culture, I wanted to branch out,” says Vanetta Roy. “I didn’t want people to think this is just Black people food.”

Vanetta Roy operates the Old Town location and one on the South Shore. Her brother and sister-in-law, Eric and Denise Roy, founded Surf’s Up. They want to open Surf’s Up restaurants outside of the Chicago area. They’ve already opened in Huntsville, Alabama. LA, Houston, Milwaukee, and Indianapolis are also being considered. Locally, South Loop and suburban Chicago Heights locations are also planned. Earlier this year, the family-run chain also added a virtual kitchen in Avondale for online ordering and delivery.

The Roys have momentum on their side. Americans are supporting Black-owned businesses more than before as the George Floyd protests have yet again shined a spotlight on systemic racism. The Roys say Juneteenth — June 19 — was their best day of business ever. The holiday brought in crowds and sales soared. Vanetta Roy says they’ve been waiting for America to open up their minds and to support Black businesses. Support came from within the Black community and from outside: “We really needed this,” she says.

Co-founder Denise Roy, a hair stylist, says it’s been a crazy ride in recent months. Despite the pandemic, they’ve opened up four locations since March. They’re trying to keep locations separated by at least a 2.5-mile radius. They looked at the former Buona Beef location in West Loop before finalizing the Old Town spot, just south of Wells and Division.

Networking plays a big role in securing real estate, and Blacks aren’t always invited into those groups. Vanetta Roy, a special education teacher for Chicago Public Schools, mentions how some prejudiced landlords refuse to rent to Black people. In someways, having a North Side restaurant has changed how people perceive the Roys.

“Now that I’m over here, people are looking at me in a different light,” Vanetta Roy says. “Before, I was a Black girl with a Black-owned restaurant in a Black neighborhood. That’s cute.”

The tide’s changing for the Roys. At the Bronzeville location they even serve vegan Shock’N Shrimp. Ownership may bring that over to Old Town if there’s enough interest. They’ll also bring it nationwide if there’s enough demand and expansion goes the way they hope. Surf’s Up Old Town is now open.

Email (required) By signing up, you agree to our Privacy Notice and European users agree to the data transfer policy.