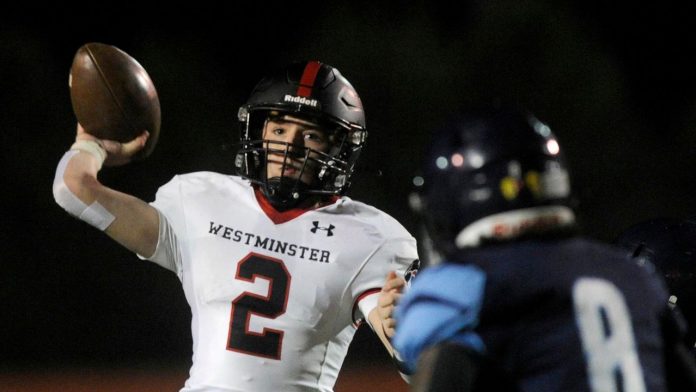 Westminster Christian freshman quarterback Brandon Musch accounted for five touchdowns and 376 total yards as the Wildcats closed their season with a 44-38 win over host Lee-Huntsville tonight at Milton Frank Stadium.

Class 5A Lee (2-8) got within 35-32 on Anthony Matthews' 3-yard touchdown pass to Brandon Bryant, but Westminster answered with a Walker Thorsen 29-yard field goal and a Musch 9-yard TD to Isiah Lattimore with 5:57 left in the game. Lee struck again on Matthews' 80-yard TD pass to a wide-open Jordan Bell, but the Generals could get no closer.

Key sequence: Lee cut the Wildcat lead to 28-26 on James Vassar’s 4-yard touchdown run with 24 seconds left in the first half. Westminster took over on its own 47-yard line after a squib kick and moved the ball 53 yards in four plays, capped by Musch’s 25-yard touchdown run as the half ended.

Coachspeak: “I felt like this game really typified this whole year, how we have overcome so much quarantines and injuries and players filling into slots on the fly. So it was really big for us to end the season with a win over a city school here at Milton Frank.” -- Westminster coach Louis LeBlanc

I’m really excited about next year as I think these guys coming back got a taste of what it takes to win games and be the team and the program they want to be. Losing these seniors is going to be tough because they could have quit at any time when it wasn’t going well, but they kept coming back to fight and", as we always tell them, the scoreboard and our record don’t define us and these guys took that to heart, coming ready to work every single week." -- LeBlanc

They said it ... : “This is a big team win for us and I could not be more proud of our guy, the way we have handled adversity all year as coach LeBlanc tells us we need to do. I’m so glad we got to cap this season off with a win for these seniors and I look forward to what next year holds” -- Musch

“This team really has the heart that I’ve never seen before, the way we fight even though we may not be the biggest or most athletic, but everyone fights so hard and it’s just awesome to be a part of this team and getting this win tonight.” -- Sheppard