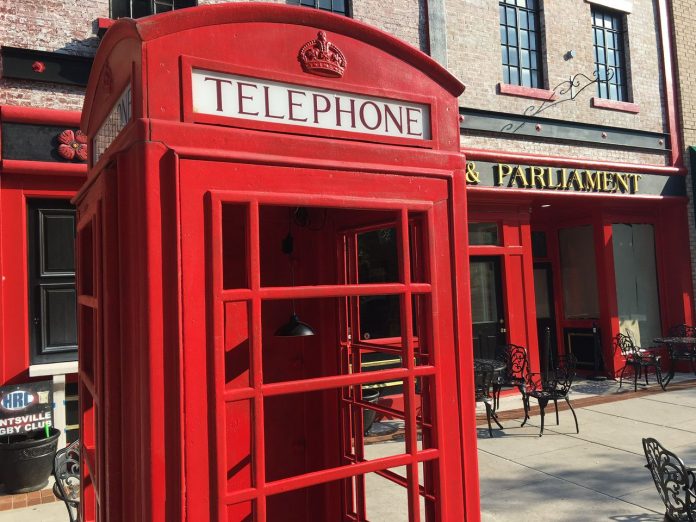 
No, British food isn’t bland, says Barnsley, Yorkshire native Shane Brown. “It’s hearty and, contrary to belief, flavorsome,” he counters. “My wife was a hater until she tucked into her first fish and chips, wrapped in newspaper and smothered in mushy peas.”

Brown’s British-style pub The Poppy, which opened 2019 in downtown Huntsville, will soon bloom to include a new kitchen next door and, upstairs, a gourmet store and second bar. All of it will be under a rechristened name, The Poppy & Parliament. They’re aiming to open the food facet late-August.

The menu will boast dishes like fish and chips, oak-smoked salmon, homemade sausages, shepherd’s pie, steaks, banana bread pudding and coffee souffle. “It’s not a restaurant. It’s pub food in a pub,” says Barry O’Connor, an Irish-born chef and Brown’s co-owner of the expanded venture. “We’ll be making our own bangers and mash and our own sausages. Making our own chunky chips, hand-cutting them, and then bringing in good North Atlantic cod from New England. Things like that.”

Head chef Kristen Caroselli says in addition to signature British dishes like fish and chips, the gourmet store can serve as a gateway for guests. "An introductory thing to familiarize them with the tastes and flavor profiles we're going with," Caroselli says.

The original, bar side of The Poppy, with its eye-catching bright-red trimmed exterior and "Ziggy Stardust"-style phone-box out front, is about 1,400 square-feet inside. The added space will double that. The bar currently employs a staff of five, Brown says. Once the food comes online, number of employees is expected to triple or quadruple.

The pub and kitchen interiors will connect via a doorway about midway down their shared wall. Guests will enter the business through the existing Poppy entrance and seat themselves. Upstairs on the mezzanine there will be additional seating as well as a bottle, wine and cocktail bar, where customers can wait for seating to open downstairs, if need be.

The Poppy & Parliament's owners met "by pure mistake," O'Connor says. A Nashville resident, O'Connor was in town working with some hotel restaurants through Performance Foodservice. "We met each other in the bar," Shane says, referring to his bar, The Poppy.

O’Connor was born in Cork, Ireland. His mom was a chef, so food’s always been central in his life. “I left school at 14 to go to catering college in Ireland, because basically I wasn’t academically inclined,” O’Connor says. “I’ve never done anything else but cooking and I still love it. You’ve got something you’re learning every single day.” At one point in his career, he interned at a London restaurant with a young and then mild-mannered Gordon Ramsey, long before Ramsey became a fiery reality TV star.

Eventually, O’Connor founded and ran a series of ventures in Ireland, including Victoria Cross pub the Crow’s Nest. He made his way to the American South, including a spell with Gainesboro, Tenn.‘s Bull & Thistle gastropub. He feels The Poppy & Parliament concept is a good fit here because, “Huntsville is a unique place in the sense you have multi-culture but you have a very adventurous palate.”

Brown was born and raised in England. "Yorkshire is a very prominent area for fish and chips and is renowned for their quality," Brown says. "My mum cooked some of the dishes on the (Poppy & Parliament) menu every night." After earning a master's degree in poultry science, Brown worked in the poultry business for a while, which brought him to Alabama. Eventually he made a chicken-to-rockets career pivot, becoming program manager for a local aerospace company.

Since moving to this region of the U.S., O'Connor has become fond of certain Southern dishes, including collard greens and fried-green tomatoes. At Poppy & Parliament, he plans to focus mainly on the upstairs store and help cook in the downstairs kitchen on weekends.

Caroselli, a Bloomingburg, N.Y. native, arrives in Huntsville after three or so years as executive chef at Tuscaloosa's R. Davidson Chophouse. She also previously worked for the USDA (U.S. Department of Agriculture. Caroselli says a search for "creative expression and hands-on" vocation led her into the food business, and she loves "to watch people in the kitchen develop skill and knowledge."

According to Brown, he’s wanted to add a kitchen for a while now. “As a Brit, missing some of the dishes I love, it’s always been a thought of mine. After opening The Poppy and seeing the demand for the food side it just seemed like a logical thing to do.” But adding a kitchen to the original space just didn’t work. “Then,” he says, “the adjacent building came open and I was able to secure the lease. This was the start of being able to follow our dreams.” Still, most entrepreneurial dreams don’t involve navigating a worldwide pandemic, like the ongoing coronavirus. “Times are definitely tough,” Brown says, “but as the Brits say, keep calm and carry on.” (More info at facebook.com/pg/thepoppyhsv.)