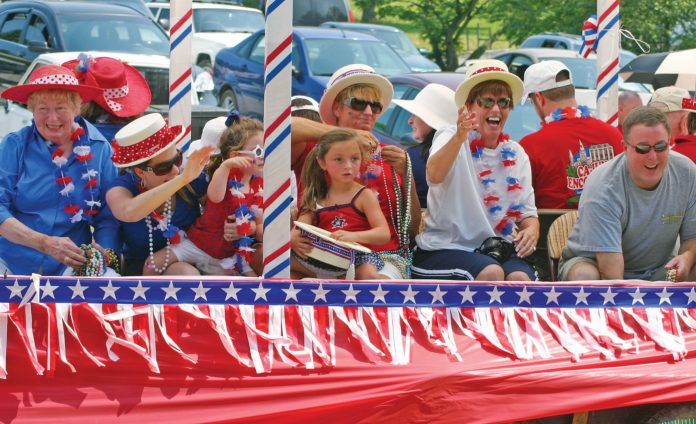 Stacey Swann, executive director of the Scott County Chamber of Commerce, said that a decision has been made to move forward with the parade, with no changes from last year except the start time — 8 p.m. on July 4.

The parade traditionally steps off at 11 a.m. on the 4th of July. However, there will not be a full-fledged Firemen’s Fourth Festival this year, although Huntsville Mayor Dennis Jeffers said Sunday that plans are being amended to include more than had originally been hoped for.

By shifting the parade to 8 p.m., the hope is that those who turn out to watch the parade will stick around for the 10 p.m. fireworks and enjoy an evening on and around the historic courthouse mall in downtown Huntsville. There will be food vendors on the mall, and Jeffers said Sunday that a few non-food vendors will be on-hand, as well.

The change of plans comes just days after Tennessee Gov. Bill Lee signed a new executive order permitting parades and festivals to resume. Those activities had been on hold due to coronavirus concerns.

“I’m tickled that we’re going to be able to move forward,” Jeffers said. “After careful consideration, we decided that we should safely celebrate our Independence Day. Our tests are steady, we still have only a handful of cases (of coronavirus) in Scott County, and we feel like we should celebrate our independence the best we can.”

The parade will be open-entry for anyone who wishes to participate, and Swann said that hopes are the traditional family floats will be entered, and there are hopes for additional entries, as well. The only stipulation is that throwing candy, beads and other items will not be permitted at this year’s parade, in consideration of state and federal guidelines.

The parade will organize just east of Huntsville School, and follow its traditional route along S.R. 63 to Courthouse Drive, circling the courthouse before returning to the school along S.R. 63.

By the time the parade concludes, dusk will be descending on downtown Huntsville, and firefighters from Huntsville Fire & Rescue will begin the traditional fireworks display at about 10 p.m.

Prior to Gov. Lee’s revised order on Friday, plans had been to have only the fireworks, with a few food vendors on the mall. The governor’s order explicitly banned parades and festivals.

Under the new order, there are no restrictions on hosting festivals. Jeffers said the Firemen’s Fourth will continue to be modified — there will be no entertainment, for example — because there simply isn’t time to plan it, nor have plans been made for sound setup on the mall. Prior to the governor’s order on Friday, no one knew when parades and festivals would be allowed to resume.

“We’re going to do as much as we can,” Jeffers said, adding that he is working on plans to add other things but that he is not yet ready to announce what those are. “We’ll make do this year, and plan to come back bigger and better next year.

“I feel like from about 7:30 p.m. on, folks will pour into the mall, watch the parade, get something to eat, stick around for the fireworks, and have a good time.”

The annual New River Run, a 5k/10k walk and run that serves as a fundraiser for the town’s fire department, is still scheduled for the morning of July 4. The fire department will also hold a fundraising roadblock on the evening of the 4th.