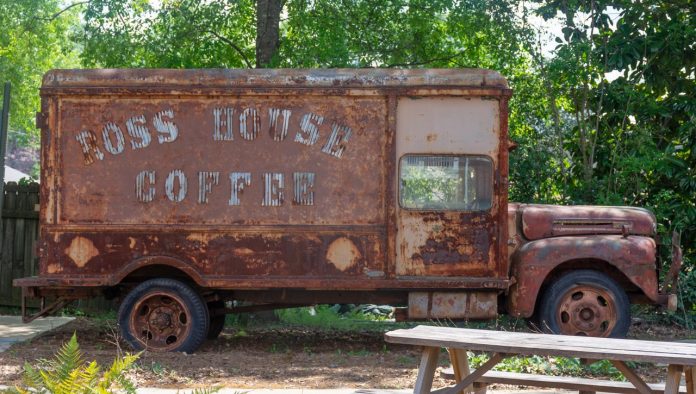 
An extra-large coffee cup walked up and down Ross Street. He waved, he twirled, he clicked his heels and he pointed cars toward the shop behind him.

The barista brought in several new customers to the Ross House Coffee Roastery in Auburn nestled next to a giant apartment building. Wilson’s dancing coffee cup routine is one of many creative and proactive measures coffee shops are taking to not only keep their regular customers coming in but to try to add new business during the coronavirus pandemic.

Jumping into and dancing through Friday! Give us a wave as you drive by and Remember... even if things feel strange right now God is still on the Throne. If we can all give him our attitudes, fears and opinions... he can give us what is so much better! Choose joy! Choose kindness! Choose faith, support and prayer! And laugh a little for the right reasons. I promise it really does boost your immune system... and your mood and outlook.

Around the state, many coffee shops were a step ahead when it came to adapting to the coronavirus. Many either closed their cafes earlier than the day the state demanded that all dining rooms close, or were ready to do so by the day the order came.

In some ways, it was easier for coffee shops to make that call than restaurants, Sarah Gill, the owner of Mama Mocha’s in Auburn said. Baristas are usually paid at least minimum wage plus tips while restaurant servers are paid less than minimum wage and rely on tips for their income. Switching to carry out, which doesn’t usually generate as many tips, would have less of an impact on the baristas who have that guaranteed wage. Coffee shops also run on a smaller staff, so less shifts would have to be cut.

Beyond the logistics, the coffee industry is a proactive industry in general, Gill said. Gill, who keeps in contact with shop owners from all over, said they tend to be very socially aware. On a global level, they need to know what’s happening because America imports its beans from other countries, so Gill had a good idea of what was happening in Italy. Christian and Courtney Hilley, the owners of Chaleur in Mobile, said they started planning as early as March 9 because of what they had been reading.

Successful coffee shops are also very in tune with their communities because most of them serve as a gathering place. The friendly neighborhood culture many of them cultivate allows them to know how their community is feeling about topics, like worries over the coronavirus, but it also became a big reason the shops decided to close their cafes.

With schools shut down, people were flooding to their coffee shops. As the baristas tried to sanitize everything, they saw people sneezing and coughing and then touching things, and they realized they just couldn’t keep up, Gill said. It was also hard to police customers, Christy Grazes, the owner of Honest Coffee in Huntsville said. Grazes had placed tables six feet apart, but people still moved closer.

“We just thought for simplicity’s sake and public safety, it would just be a lot easier to go to to-go only,” Grazes said. “Honestly, it was just kind of an easy decision to make.”

Once their cafes closed, the owners and their baristas started brainstorming ways to make themselves stand out in ways that were both accessible and safe beyond carryout, delivery and pickup options. Fortunately, creativity and survival instincts are two things that characterize those who find success in the coffee business.

As small businesses, coffee shops are already used to finding ways to stand out through their aesthetic, seasonal menus and roasting techniques. If they don’t, then they won’t survive, whether there’s a pandemic or not.

The shops have added online ordering, something several were already looking to do, and they have started to emphasize the retail aspect of their business, selling beans, mugs and shirts, among other things. They’ve also expanded their menus. Ross House added drinks with themed names like “No COVID-19,” “Sanitizer” and “Wash your hands” as it sells from its coffee stand (which is like a lemonade stand but with coffee). Mama Mocha’s and Honest Coffee have started to sell locally produced items, such as milk from a local dairy to help support local business and “keep supply chains clean.” Chaleur is selling cold brew concentrate that allows customers to get several days worth of cold brew from one bottle. For a twist, it’s also added ramen to its typically French-inspired menu.

“It’s kind of out of left field, but it just seemed like something really fun,” Christian Hilley said. “And it’s something inexpensive because people are not looking to spend a lot of money right now… We got a pretty good response so far. It’s really kind of funny.”

For the most part, people, from the customers to those in the business, have responded well. Chaleur’s social posts are being shared more. Customers are buying gift cards from Ross House. Baristas are jumping in with ideas at Mama Mocha’s. The local coffee shops are banding together in Huntsville.

Coffee shops have an advantage of an emotional connection.

Peoples’ bonds with their coffee shops are different than the bonds they have with favorite bars, restaurants and stores, and people are very invested in making sure “their” space will still be there after the crisis is over. The act of going out and supporting the businesses also gives people a chance to get out and participate in an action that reminds them of better times.

“I think coffee shops give people a feel of normalcy,” Grazes said.

Right now, it’s hard to tell if it’s sustainable, Hilley said. On one hand, the number of customers has dropped. On the other, the dollar amount per purchase has gone up, and the online stores have taken off. It’s also helped that treating yourself to a cup of coffee is cheaper than a nice meal to go in these tough economic times, so business has continued.

With the ever-changing situation, it’s hard to predict what will happen. Many of the shops are focused on the day-to-day, but some worry that if things continue to worsen, the entire industry — not just the individual shops — might be in danger.

About 90 percent of the coffee beans in the US are imported. Only two states, Hawaii and California, and Puerto Rico, an American territory, have the climate to grow beans. Other places are experimenting, but the bulk of the beans come from other countries, particularly South American ones.

At the moment, that’s not a huge problem for smaller coffee shops because they get their beans through importers who still have warehouses full of green beans, Hilley said. But for bigger companies who go to farms in other countries, buy up the stock and import it themselves, supply may become an issue if they can’t travel.

Even though it’s not a problem yet, some of these shops who roast their own beans, like Chaleur and Mama Mocha’s, are keeping a close eye on international trade.

“If this gets really serious, to the point where we’re zeroing out on how much comes in — I mean, coffee has to come in from all over the world,” Gill said. “It’s not grown here. So it’s kind of hard to make any predictions, but this could be really, really bad if we don’t get it under control.”

Coffee shortages are a valid concern, although Joel Eastlick thinks that’s something that may happen gradually down the line. Eastlick, the co-founder of Yellow Rooster Coffee Imports, said there are many things that could affect the coffee trade. There may be less containers available because more are being dedicated to shipping medical supplies. People from coffee companies can’t go visit farms to sample new beans. However, the real problem is how the shutdown in America could affect the supply chain.

Travel is not necessary when it comes to trading beans. As a small importer who deals with small shops and small farms, Yellow Rooster has a close relationship with its partners and that trust will allow the trade to continue. Eastlick said he can’t speak for other types of companies, but he’d imagine big companies like Starbucks have a strong enough infrastructure to keep supplying America with beans.

The problem is, America isn’t demanding as many beans right now. Yellow Rooster has had to be lenient with its contracts with different shops since some have had to temporarily close and all of them have lost some of their business. As a result, Yellow Rooster still has beans in its warehouse left over from the shipment it received right before the shutdown. It can’t bring in new beans if it still has the old ones, which means the farmers will then have to decide what to do with their crops.

“You can’t stop nature,” Eastlick said. “So then the producer has to ask himself, do I put in all this work, all this labor? Do I hire laborers to come out to the farm and do all this harvesting?”

If the answer is no, not only will the beans rot and the following harvest will be lost, but the farmers and laborers will lose a portion of their income. The cash flow problem will leave its mark all the way down the line.

The coffee supply chain is very complex, Eastlick said. If you love the way your coffee tastes, he said, then it’s probable a lot of people put a lot of effort and heart into making it. And all those people, Hilley said, are putting in that effort to make sure it’s still safe for you to drink.