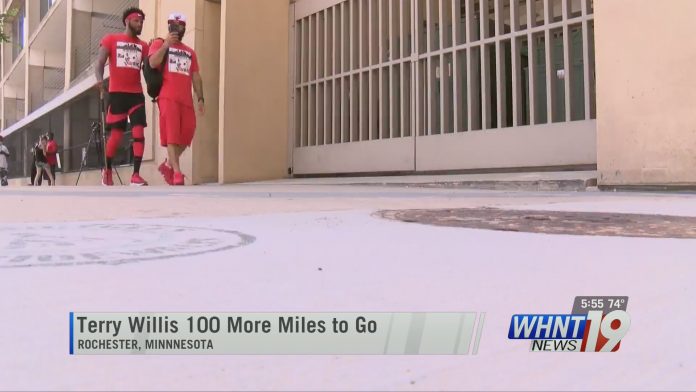 HUNTSVILLE, Ala. — Calls for the removal of the Confederate monument outside of the Madison County Courthouse continue. Tuesday afternoon Violet Edwards, a candidate running for Madison County Commission said the current commission has had a lack of action.

Two weeks ago Madison County Commissioner JesHenry Malone introduced a resolution for the removal of the Confederate monument on the courthouse square.

“The vote was unanimous and was suppose to be a victory for justice and equality here in Madison County,” said Edwards.

Now Violet Edwards, who is a candidate for Madison County Commission District Six, running against Malone says their actions to remove the monument weren’t enough.

“I think if the county commission wanted it down, it would be down. But the way they handled it was to ask the state and the governor for permission and the attorney general has already said no. Let’s pay the fine. Let’s move forward because the people are Madison County is asking us to do so,” said Edwards.

Edwards says for many, the confederate monument is a hurtful reminder of slavery and oppression.

“To put it in context, in the fall of 1904, Horace Maples the last black man to be lynched in Huntsville was murdered right here on the west side of the old Madison County courthouse. 14 months later in November of 1905, a Confederate monument that proceeded the one behind me,” said Edwards.

Edwards says she has presented the resolution “ACTION Now” (Actionable Change Through Institution Overhaul Now) to the commission and asked them to place it on the next agenda. It would remove the monument without delay.

“The commission betrayed our trust by proposing a resolution that they knew had no path to the removal of this monument,” said Edwards.

Many Confederate monuments are protected by state law. Alabama’s attorney general can file lawsuits to fine the cities who remove their monuments. But that didn’t stop Mobile and Birmingham. Their city leaders say they will pay the $25,000 fine.

Now community leaders in Huntsville are arguing that we should do the same. The Tennessee Valley Progressive Alliance has raised the $25,000 to pay the fine for the monument’s removal.

“And we are still offering to write a check today to get it done,” said Catherine Hereford.

Edwards says she is in favor of moving the statue to Maple Hill Cemetery where there are over 150 Confederate soldiers buried.

Huntsville City Council president Devyn Keith has presented a resolution to cooperate with the Madison County Commission to move the monument.