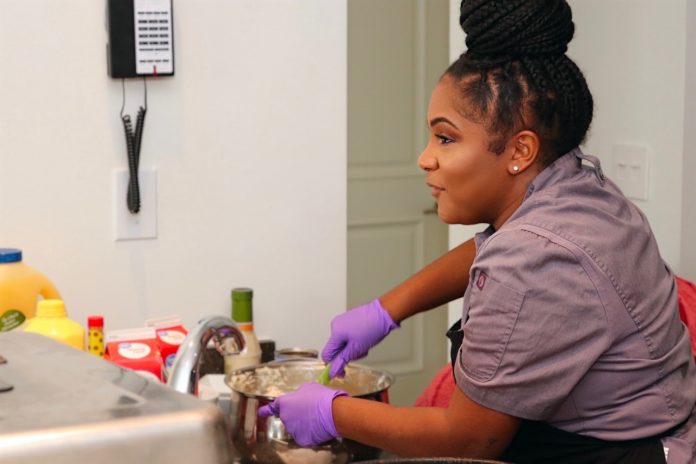 
COLUMBUS, Ga. (WRBL) – In response to the COVID-19 outbreak, economic slowdown and a disruption in food supply chains has negatively impacted food supply and in turn has created a surge in food insecurity nationwide.

Alabama A&M graduate and chef, Epiphany Jackson has used this time to advocate and work on alleviating hunger in the Columbus community.

“Everyone is hurting right now while trying to find ways to safely go out and find food which has shown me a lot,” Jackson said.

Jackson was a food science major that grew in her connection to food after being enrolled in a culinary elective class her senior year.

“I wanted to go to culinary school immediately because food and healthy consumption is so important, but I decided to continue working for a four-year degree first,” Jackson said.

While finishing school Jackson created her own business, Sweet Epiphanies, providing truffles, cakes, chocolate covered berries, and other baked goods at different events in Huntsville, Ala.

Jackson accepted the Chefs for Change challenge via Instagram created and coordinated by chef and TV personality Camerron Dangerfield and fitness enthusiast Danielle Davis to feed five families in need in the community during the pandemic.

“With everything going on right now, it was important to me to find ways to give back and alleviate the hunger in my community. Helping others is always the goal,” Jackson said.

Jackson created the social media graphic for the challenge and teamed up with her father, James Jackson, to create healthy meals for 20 people within the Columbus area.

“I had a hard time reaching people and individual families which led me to cook for the equivalent of five families and provide it to a local homeless shelter,” Jackson said.

Jackson and her father grilled chicken and cooked squash, zucchini, and red bell pepper stir fry in order to create a meal that is still healthy and easy to store before bringing it to the House of Mercy in Columbus.

The Urban league, established in 1871, was founded on the mission to empower and assist minorities, disadvantaged, and under-served citizens.

“I joined Urban league to gain friends, work with my community for the greater good, and expose my business and network,” Jackson said. “I am grateful for their help and donation to an important cause.”

In the future, Jackson plans to continue working to alleviate hunger in her community and further her career as a chef while hosting events, including private dinners, cooking lessons, sip and paints, and more. She has announced her new branding and graphic design business ENJ Branding.

“This pandemic has taught me the importance of helping those in need while using my platform, businesses, and talent to strengthen not only myself as an individual, but the community,” Jackson said.

You can reach Jackson on social media via Instagram @lovesweetepiphanies and @enjbranding for bookings and more graphic design inquiries.