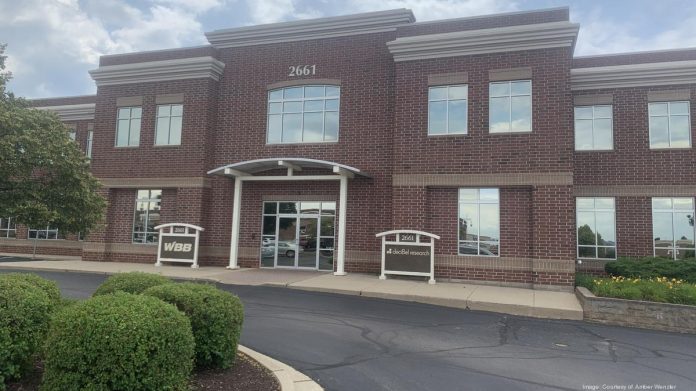 A defense contractor has doubled its local footprint with a recent move to a new office. Now it is planning dozens of new hires in anticipation of future growth.

DeciBel Research, a Huntsville, Alabama-based company that specializes in radar systems and sensor technology, has relocated to a 15,000-square-foot facility within the Acropolis office complex in Beavercreek. The new space is twice as large as the 7,500-square-foot office it was renting within the Acropolis, and includes additional lab space the company will need for future growth.

DeciBel signed a five-year lease for the new space, which was brokered by Amber Wenzler and Tony Witt of Apex Commercial Group.

Alan Puterbaugh, senior vice president for DeciBel Research, said the move to a larger office was due to anticipated growth in the local market. The company hopes to land new contracts with its main customers, which include the National Air and Space Intelligence Center and Air Force Research Laboratory at Wright-Patterson Air Force Base.

"We need more space in anticipation of the growth I think we've got coming up," Puterbaugh said.

As part of the move, DeciBel will occupy an entire floor, allowing for more controlled and restricted access that is needed for the classified work they perform for defense customers.

With more space and anticipated growth, DeciBel is looking to bring on a bevy of new employees in the Dayton area. Puterbaugh estimated they could hire 75 people over the next five years, assuming they win the contracts they are going after. If the hiring goal is fully realized, DeciBel will triple its current workforce of 25 people.

"We're looking at 20% growth a year if we're lucky," he said. "I don't know if we'll get to that 75 number, but we'll keep trying. One contract we're going after is for eight years, so if we win that one we'll be able to add a lot of people. Dayton is a good market for our company, so we're dreaming big."

DeciBel has had a presence in the Dayton area for nearly a decade, but the company is growing due to a corporate-wide emphasis on bolstering its work with Wright-Patt.

"The company is investing heavily (in the local office) because Dayton and Wright-Patt are a great market for us," Puterbaugh said. "We've been slowly building the market here over the last eight to 10 years, and we feel like if we invest in some new lab space it will make us more attractive to customers."

Looking ahead, Puterbaugh said they will continue to focus on growing their presence in the Dayton-area market.

"We're committed to Dayton," he said. "Some companies ship work out to other regions. We don't do that. We like to keep it local if we can, so we hire local and we perform local whenever we can. We're going to stay and grow in the market as long as we can."