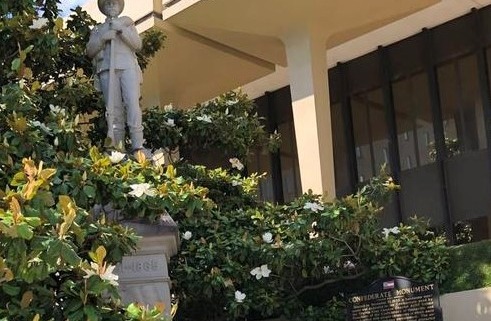 
Downtown Huntsville Inc. has thrown its collective weight behind efforts to remove of a Confederate memorial statue that was placed on the Courthouse Square downtown by the Daughters of the Confederacy in 1905.

The letter from the organization said DHI advocated “the removal and relocation of the Confederate Memorial from the Downtown Huntsville Courthouse Square to a historically-contextual location that would allow our community to learn from the great pain that this memorial represents while also removing it from our community’s courthouse grounds.’’

The letter was in response to protests that followed the death of George Floyd, a black man who died after a since-arrested white Minneapolis police officer pressed a knee on his neck for more than eight minutes. During the protest in the downtown Huntsville area, there were chants of “take the statue down.’’

The Madison County Commission and the Huntsville City Council each unanimously approved moves to relocate the statue.

The county will submit an application to the state for a waiver to legislation prohibiting the removal of statues and monuments.

The Alabama Memorial Preservation Act was signed into law in 2017 and prohibits the removal of any monument that’s stood 40 years or more. However, Birmingham and Mobile have removed statues without the state’s permission. Violating the law results in a $25,000 fine. Tennessee Valley Progressives, an organization that has pushed for the statue’s removal, reopened a GoFunMe account to raise money to pay the fine.

The City Council last week passed a resolution to work with the county on relocating the monument.

The base of the statue is inscribed with, “In memory of the heroes who fell in defence of the principles which gave birth to the Confederate cause.’’

Not surprisingly Chad Emerson, CEO of DHI, said there has been some negative feedback to his group’s support of moving the memorial. He said he’s also heard plenty of support.

“Nowadays in the world with the World Wide Web, there’ll always be someone expressing an opinion that’s contrary. But we’ve largely found that other entities and faith groups and individuals have supported this measure to remove and relocate.

“In fact both the County Commission and City Council have voted unanimously in support of that position. So it feels like there is a strong community-wide consensus to remove and relocate to a historically contextual location.’’

Emerson suggested one suitable site to relocate the statue, which is under the direction of the Madison County Commission, is the Confederate cemetery at Maple Hill Cemetery.

“We believe that that is an equitable decision for both all the people that visit downtown as well as go to the courts as well as for the business,” Emerson said. “We’ve had a lot of the downtown area businesses say they would like to have that removed to a historical location because it is viewed by some of the customers as devisive.”

Here is the text of the statement, which was signed by Emerson and DHI Board Chair William Stroud:

“The tragic killing of George Floyd has magnified the deep pain experienced by African American and other members of our community,” the DHI statement said. “We are heartbroken by this pain and believe a true path toward healing requires more than words of reconciliation or statements of empathy and support.

“Rather, this path toward understanding and healing requires specific actions to directly advance this critical process. Today, we advocate that one such step should be the removal and relocation of the Confederate Memorial from the Downtown Huntsville Courthouse Square to a historically-contextual location that would allow our community to learn from the great pain that this memorial represents while also removing it from our community’s courthouse grounds.

“We implore our government leaders on all levels to utilize all available means to take this step to promote the healing process. We understand that the removal and relocation of this artifact will not remove historical prejudices and pain by itself, but we hope it represents a sincere statement to our fellow community members that we are listening to their pain and seek to meaningfully further a process of healing together with them.”