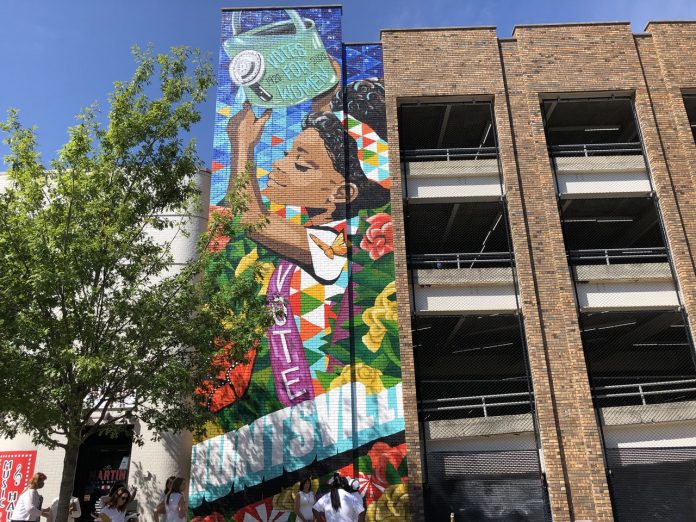 
As Camillia King-Stanley looked up at the towering mural, an artwork of brilliant colors celebrating a brilliant moment in history for women, she saw a lot.

It went far beyond the two-week painting of Nashville artist Kim Radford that was formally recognized Tuesday on the 100th anniversary of the women’s right to vote being ratified. King-Stanley said she saw history, she saw hope and she saw a time in the future when she can bring her two young daughters to downtown Huntsville so they can see and appreciate a better world.

“It’s emotional,” she said of looking ahead to that day with her girls. “I want to cry. When we go to school or they are getting ready to do something or one of their activities, I always tell them, ‘Be amazing. You’re amazing.’ And they’ll be able to see, ‘OK, I am amazing.’”

Their mom, as vice president of the Women’s Economic Development Council board in Huntsville, was a part of a sprawling two-year effort to bring the mural into reality. The mural was like a child raised by a village of ideas and supporters until Radford last month began painting the brick on the eastern side of the Clinton Avenue parking deck.

Radford researched the project and decided, “I want that wall.”

“This is really cool to see this come full circle from when I first heard about the project,” she said during the ceremony.

The mural towers more than three stories on the parking deck wall facing Washington Street between the courthouse square and Clinton Avenue and features a young African American girl lifting a watering can that reads “Votes for Women” flanked by 1920 and 2020. The artwork features brightly-colored flowers and butterflies as well as a triangular pattern representative of a southern quilt.

The girl is wearing a purple sash that reads “vote” and, at the bottom, an upward tilting “Huntsville.”

“This mural is titled ‘This Girl Can’ and celebrates and honors the centennial anniversary of the 19th Amendment,” King-Stanley told the audience during the ceremony. “While the young girl is African American, she is an artistic representation of all generations of women who have fought before her to have the right to vote. Our hope is that little girls, including my own, will look at this mural and feel hope and inspiration in what we can accomplish when we work together.”

While the 19th Amendment guaranteed women the right to vote, that did not include women of color in Alabama, King-Stanley reminded the audience.

Among the heroes behind the project was Arts Huntsville.

“A guiding vision for public art in Huntsville is to create installations that lift the spirit and engage the mind,” said Allison Dillon-Jauken, executive director of Arts Huntsville. “Through this soaring mural, Kim has embodied that vision as ‘This Girl Can’ now soars as it greets residents and visitors along Washington Street here in downtown Huntsville each day.”