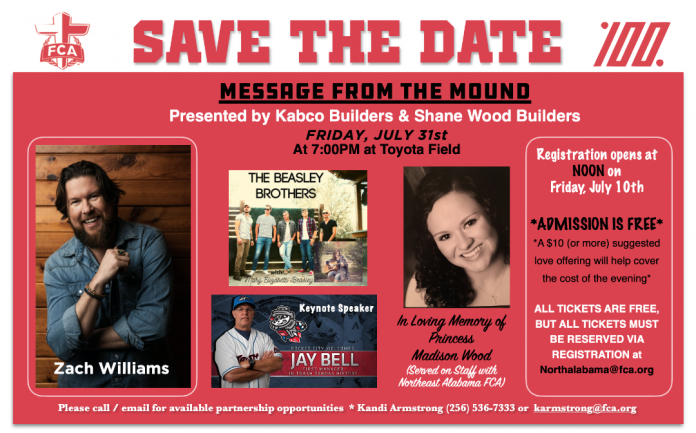 
MADISON- Toyota Field will be transformed into a field of inspiration on Friday, July 31 as the new home of the Rocket City Trash Pandas will host the Fellowship of Christian Athletes (FCA) “Message From The Mound” fellowship rally. The one night event begins at 7:00 p.m. and admission is free, but all tickets must be reserved via registration at [email protected].

Presented by Kabco Builders and Shane Wood Builders, the rally will feature inspirational speeches, spiritual testimonials, music and prayer. The keynote speaker will be Jay Bell, former Major League Baseball player and current manager of the Trash Pandas. Musical entertainment will be provided by Zach Williams and the Beasley Brothers.

Williams was part of a Southern Rock band before turning to Christian music where he began to have solo success. Born in Florida and raised in Arkansas, Williams left rock music in 2012 and became the worship leader of the Central Baptist Church in Jonesboro two years later. In 2016, he signed a recording contract and is currently based in the Music City of Nashville.

Led by brothers Lawson and Jackson of Huntsville, the Beasley Brothers tagged up with Austin McBride and Josh Bolding and became one of the region’s most popular acts. Their music catalog spreads across many genres.

The Message From The Mound is replacing what would have been the 15th Power Leadership Training (PTL) normally a two-day event held at the Von Braun Center. The FCA administration is disappointed the PTL will not take place this year due to the current COVID-19 pandemic. Instead, the outdoor event will feature some of the same fun, fellowship and worship all in memory of Madison Wood.

In 2012 as a high school student, Wood attended a PTL and became enthralled with the messages of the fellowship and spiritual atmosphere and chose to serve as an intern with the FCA the following year as a high school senior. In 2015, she was diagnosed with an extremely rare sarcoma cancer and passed away on May 8, 2017. Her months of battling the disease became an inspiration to many and her chilling dedication to the FCA and her faith has become a lighthouse for others that have followed her.

The FCA ask that those attending place a love offering of $10 or more to help cover the financial costs of the event. Business partnerships are encouraged and can be a huge part of the evening’s festivities. Those businesses interested in assisting the fellowship can contact Kandi Armstrong at 256-536-7333 or via e-mail at [email protected].