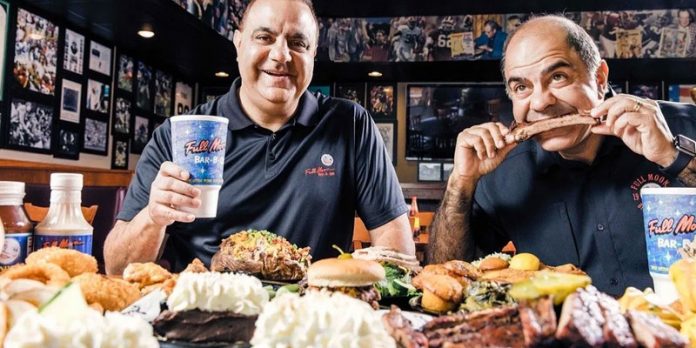 
During times of unimaginable uncertainty in the restaurant industry, Full Moon Bar-B-Que continues to cook. Low and slow, of course. But steady, too. Even during a pandemic, it seems, people still want their ‘que.

In the 23 years since the Maluff brothers — David and Joe — purchased Full Moon Bar-B-Que from Pat James, they have grown the business from a single store on Birmingham’s Southside to 15 locations across the state. The Birmingham metro area has eight locations, including one in the Hill Student Center at UAB (it is scheduled to reopen in the fall). The brothers are even moving ahead with plans for a new store in Huntsville by the end of 2020.

James, a former football coach who spent a dozen years as Paul “Bear” Bryant’s assistant, started the business in 1986 with his wife, Eloise. They called it Pat James’ Full Moon Bar-B-Que. David and Joe, sons of Lebanese immigrants, purchased the original Birmingham location in 1997. The brothers have stayed true to the initial vision with colorful, sports-centric décor celebrating favorite regional teams; made-from-scratch dishes; and hands-on involvement in the business. Perhaps most importantly, they have always used hickory wood-fired pits to cook the meats. They have five big, portable pits, allowing them to cook Full Moon barbecue anywhere — feeding groups of 10 to (once restrictions are lifted) 10,000.

These wood-fired pits make a world of difference, David says. “We have a passion to do barbecue right. That’s why all of our stores still have wood-burning pits in them. And we do it the old-fashioned way — fresh, from scratch, every day. We cook our meat low and slow right in front of our customers, and they see it, smell it, taste it. And that’s what’s kept us thriving through the years.”

During its flavorful 35-year history, Full Moon Bar-B-Que has gathered fans from across the country. It’s cheekily called the “Best Little Pork House in Alabama,” but Full Moon offers a comfortable, family-friendly atmosphere that has served generations and appeals to all nationalities, David says. “We’re real big on making the customer feel good. That’s our job. When you come into our house, we make you feel warm and welcome. We’re here to make you happy.”

Full Moon was named one of the top 10 barbecue restaurants in the U.S. by Huffington Post. The restaurant’s red and white sauces are on grocery store shelves along with the signature chow-chow, which is served on every sandwich.

Full Moon boasts two items on Alabama’s list of 100 Dishes to Eat Before You Die: the crisp vinaigrette slaw and the baked-fresh-daily Half Moon chocolate chip and pecan cookies (half dipped into glossy, dark chocolate). Both these items are made according to Eloise James’ original recipes.

When dining rooms across Alabama were closed because of the coronavirus, the brothers simply continued with drive-thru service, takeout and curbside pickup. The dining rooms — except at the Southside and UAB locations — are now back open at 50% capacity. They also have a food truck, and they continue to deliver with dozens of vans brightly painted with big smiling moons.

There really wasn’t much of a pivot, David says, besides shutting down the dining rooms. “We were already set up for drive-thru, catering (and) curbside. That’s our model. We got stronger in that sense, but we’ve been doing it forever. You know, we’re one of the few restaurants that can have a full menu like we have on the drive-thru menu. So it’s automatic for us to thrive in a situation like this, because we do it every day.” Besides, he adds, barbecue travels well.

What has changed, though, are the expanded health and safety precautions at each restaurant, Joe says. Things like maintaining social distancing between tables, hanging plexiglass between the booths, regular temperature checks for employees, masks and gloves for everyone who works there, extra attention given to sanitizing surfaces and washing things in the kitchen.

“We have to take these measures every day to keep our employees safe, to keep our guests safe,” Joe says. “That’s the most important thing at this point.”

The employees — some of whom have been with Full Moon for decades — have risen to the challenge, he adds. “They are all on board. They’ve been troupers through it all.”

“I’m proud of our people,” David says. “Being in the restaurant business is tough enough. Then adding all these measures on top of their jobs. You have to remember, these guys are wearing a mask in the kitchen! It’s hard for them. It’s hard for us to manage because we’ve never been through anything like this before, right? That’s our duty … we’ve got to keep everyone safe. We’re going to do whatever it takes to keep our business thriving and our employees safe. Whatever it takes.

Full Moon has long been known for scratch-made Southern sides like collard greens, baked beans, fried green tomatoes, potato salad, fried okra and mac & cheese. But over the years, the brothers have expanded the offerings to suit a variety of tastes and lifestyles, adding freshly made salads topped with a meat of your choice, hand-breaded chicken tenders and gigantic baked potatoes overstuffed with meat and fixings. They put wings (Buffalo and smoked) on the menu several years ago, and the fried catfish (farm-raised in Mississippi) is extremely popular.

But it’s the savory, smoky barbecue that is most famous here, especially the pork. Whether you get it chopped or request it sliced, you’ll want to order it like the regulars do — with “a little of the outside meat” mixed in. There are classic spareribs as well as baby back ribs. The brisket is from Black Angus cattle. Smoked chicken, turkey and spicy pork links are other options.

All this food is made using decades-old recipes and time-honored techniques; it’s comforting and familiar. And it makes people happy.

Back in March, the brothers started a “Feed a Friend” campaign, and they’ve extended it through June. For years, David and Joe have quietly worked behind the scenes with churches, schools and nonprofits, but they had to enlist the help of people on the restaurants’ email lists to find families in need.

When the pandemic hit, David says, “we saw a lot of people unemployed, not working, hungry. It broke my heart; it broke my brother’s heart.”

Each week, they get 300 to 400 responses to their Feed a Friend query. They go through these messages every day, identifying families in need and then sending food to their homes. “I’ll tell you,” David says, “the reactions we get … will bring tears to your eyes. When they hear they are getting fed today … they are overwhelmed with joy. … It’s anonymous, who suggested that they need food. We bring it to their front door. We don’t say a word to them except, ‘Enjoy.’

“We’ve gotten a huge response,” David says. “A lot of this we don’t advertise, and we don’t want to advertise. This is from our hearts to the community. And I don’t care who it is, whether they’ve been a customer of ours or not. That doesn’t matter. We need to feed the kids and the families in our community and support them when we can.”

The brothers do this every day, and sometimes they’re feeding two or three families a day. But that’s not all.

Alabama History Day representatives made their presence known in the 2020 National History Day Contest with winners emerging on the student and teacher levels.

Following an intense competition among middle and high school students from across the nation, Alabama participants had a strong showing in the virtual awards ceremony that was held Saturday.

Eli Stapler of Hampton Cove Middle School near Huntsville won the History in the Federal Government Special Prize for his exhibit project, “CCC: Roosevelt’s Tree Army.” The prize is awarded to the best entry in any category, in either division, which illuminates the history of the American federal government.