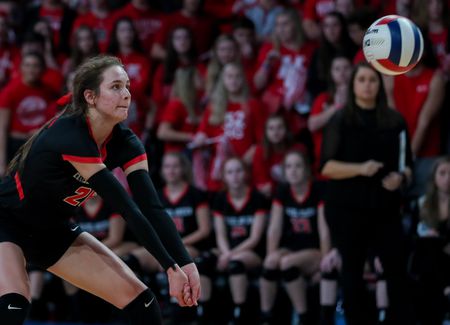 Butler played the usual youth sports growing up, but focused on tennis. She was good and the ball and racket game, participating in tournaments and figured it would continue as her favorite sport.

Because of her height, Butler was urged to try another sport by her recreation softball coach, who was also the league volleyball coach.

“I really just love the sport,” said Butler, who was selected the AL.com Huntsville Region Female Athlete of the Year. “At the time when I decided to back off tennis a bit, volleyball was so new and exciting, and it has stayed exciting. Obviously, I love tennis as well and I couldn’t quite give it up because it is a special part of me, but volleyball is my home and my happy place.”

Butler posted a region-best 771 kills while helping the Trojans to their third championship match in the past four years. The 6-foot-1 rising senior also had 135 blocks, 243 digs and 63 aces last season.

Butler was selected to the North squad in AHSAA's annual Sports Week North-South volleyball match, comprised of rising seniors, but the event was canceled because of the COVID-19 pandemic.

She also missed much of club volleyball season because of the pandemic.

"I love the team aspect of volleyball and being on the court with my teammates," Butler said. "In tennis you get the team aspect, but your team cannot help you when you're out on the court alone or with just a partner. It's also kind of cool how you don't really use equipment for volleyball, just yourself and a net."

Before volleyball became the chosen sport, Butler played basketball, softball and tennis. Basketball and softball fell out of favor as volleyball took precedence, but she stayed with tennis, too.

Butler earned a spot on the Hazel Green varsity tennis team as a seventh-grader, playing No. 6 singles. She played No. 2 singles both as an eighth-grader and freshman before taking over No. 1 singles for the past two seasons. She has played No. 1 doubles for the past three seasons.

Butler was 6-0 in No. 1 singles matches this season and 5-1 at No. 1 doubles with partner Camryn Bassler, also a volleyball player, until the season was cut short by the pandemic.

"There are quite a few things like moving side to side in tennis and volleyball," Butler said. "I was used to that and the hard, short sprint and come back and I think that helped me a lot when I started volleyball. Obviously, shoulder strength is big in both."

She's also a member of the high school choir.

The athletic genes were always there. Grandfather Dexter Butler played football for Ole Miss and dad Shaun played golf at Snead State. Mom Cindy was a majorette at UNA, where Shaun finished.

The oldest of two children — 11-year-old sister Whitney Blair participates in volleyball, swimming, tennis and dance — Butler got to spend lots of time with family during the recent shutdown. She still managed to work out at home, but the time away from sports gave her new perspective.

"It really made me appreciate the sport and my team, and everything about it," Butler said. "I even missed school a lot more than you would think the average teenager would. I missed my team, missed the daily grind.

"I was watching film during the quarantine and was like, 'man, I'm ready to get back out there.'"

There’s another season left, volleyball first in the fall then tennis in the spring. She feels there’s unfinished business in volleyball.

“I was there on the court on the last play when we won and the last two years when we lost,” Butler said. “Seeing the other team celebrate, that makes me want to work even harder.”