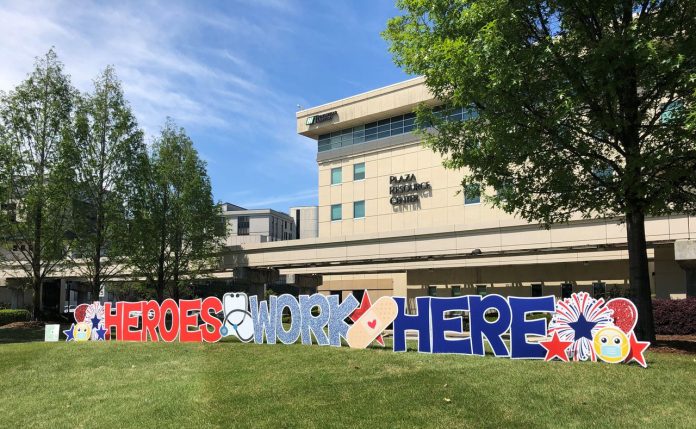 
A leading state lawmaker said Alabama needs to abandon its “meat cleaver” approaching to closing businesses while the mayors of the state’s largest cities are talking about how to reopen a shutdown economy.

Meanwhile, healthcare leaders urge caution in easing off dramatic steps implemented by Gov. Kay Ivey in an effort to slow the spread of the novel coronavirus with an opinion that moving too slow is preferable to moving too fast to flip the switch on the economy.

It's a debate seemingly without a simple answer, a debate that perhaps has merit on both sides and a debate that's happening even as Alabama's death toll from COVID-19 continues to rise.

How, and when, does Alabama reopen?

"One of the questions we're starting to get – and we're definitely all talking about it – is how do we reopen," Madison Mayor Paul Finley said. "How do we bring back what we've constricted down back open again?"

Carefully, thoughtfully but without hesitation is how state Sen. Arthur Orr, R-Decatur, would do it. One of the state’s most influential lawmakers and chair of the Senate education funding committee. Orr told AL.com on Saturday that he has communicated his views to Ivey and Dr. Scott Harris, the state health officer.

"What I encouraged them to do is to not sit and wait until the end of the month to take the next step but to evaluate and see if we can't start a step-down process," Orr said. "By that, I mean I'm troubled at the meat cleaver we used with closing businesses rather than a scalpel."

Orr spoke on the one-week anniversary of Ivey’s shelter-at-home order – a last resort to isolate Alabamians as much as possible to deliver a knock-out punch to the coronavirus. Restaurants are closed except for take-out meals and groups of no more than 10 are permitted to gather anywhere.

On this Easter Sunday, state law says church doors will be closed. Businesses have received labels as either essential or non-essential and the latter designation forces those businesses to close at least until the order expires April 30.

That's the "meat cleaver" that Orr said he sees. A more precise scalpel would have been better.

"By that, people want to buy a pack of undershirts, they can't go to Kohl's to buy it but they can go to Walmart," Orr said. "If I want to buy a floor lamp for my house, I don’t go to the furniture store that sells lamps. I go to Lowe's. The government has created an uneven playing field."

The rationale Orr has pushed toward Ivey and Harris is not a full-blown return to pre-coronavirus life. It's a nuanced approach with the objective of salvaging businesses and jobs without jeopardizing Alabama's fight against the virus.

The senator also pointed to the projection models that have tilted from predicting Alabama could see 10,000 deaths by the middle of May – a forecast that came as Ivey issued the stay-at-home order – that has since been revised to speculating fewer than 400 people could die.

So far, 60 coronavirus-related deaths have been confirmed by the Alabama Department of Public Health while 93 deaths remain under investigation as likely coronavirus cases. Somber as those numbers are, Orr said they are far lower than expected.

The pain is real, whether it’s in the heartbreak of not being able to say goodbye to a loved one at a funeral to mere inconvenience at what officials have termed a “new normal.”

But a relaxing of the social distancing standards – from standing at least 6 feet away from the next person to shuttering in-house dining at restaurants – is not yet appropriate, according to ADPH.

"Given the incubation period of COVID-19 – which is generally between 5 and 7 days for a person to become ill but can be as long as 11 to 14 days – we really cannot say, 'OK, we've done' this and take a victory lap," Dr. Karen Landers of the health department said. "What's going to happen is this virus is not going to go away."

Nevertheless, just as the coronavirus has proven to be a national security threat – the U.S. topped 20,000 reported deaths Saturday since the first just five weeks ago – the restlessness to restart the economy in Alabama is just as real.

"You can hear people in Tuscaloosa and Birmingham and Mobile, there's different perspectives in different areas," Finley said.

Asked if he could characterize the different perspectives, Finley declined.

"I think everybody has their own perspective when it comes to decisions," he said. "I can't talk about anybody else and I won't."

But he commended the lockstep nature in which he, Huntsville Mayor Tommy Battle and Madison County Commission Chair Dale Strong operate together – not just as a newfound unity in the midst of the coronavirus pandemic but also on issues long before the disease arrived in the U.S.

"There are different perspectives from different areas," Finley said. "There are different legislative thoughts. But in our case, it's the balance of health and economics. And right now, the health side is higher than the economics and that will eventually change and we'll work together to bring it back."

But how and when? Those are always the questions with elusive answers.

Landers said maintaining the course – whatever that course may look like over the summer and into the fall – is the best offense to conquering COVID-19. It also buys time for researchers to identify more effective treatment methods for the disease with no cure as well as time to potentially develop those cures.

"The state health department is not going to back off until we are certain we are seeing meaningful progress toward our goal," she said. "And that is reducing the spread of this virus and saving people's lives."

Another issue raised by Orr is the elimination of elective surgeries by Alabama hospitals as all resources were shifted to brace for a surge of coronavirus patients who needed hospitalization. Awaiting a surge that may not come, though, is crippling the healthcare industry – cutting off valuable revenue streams at a time when costs are soaring.

Orr also pointed to job cuts at Huntsville Hospital, where Spillers said about 2,000 of the hospital’s 15,000 employees have been impacted to some degree.

"Therefore, it's time, in my opinion, to reconsider and allow the hospitals and the doctors to begin elective surgeries," Orr said. "Things that don't get looked at, biopsies we put off for weeks or months, that could mean somebody's life on the other end. A colonoscopy that could find polyps and cancer, none of those are getting done."

Spillers said hospitals could immediately turn the lights back on in their operating rooms. But not without lingering uncertainty of a future coexisting with the coronavirus.

“We’re perfectly capable of taking care of those patients today and keeping them separate from COVID patients and treating them and not having to worry about infection-control issues,” Spillers said. "The problem from the healthcare perspective is supplies. You don’t want to use supplies on elective patients if there are still hot spots around the state that might need our PPE, sedation drugs and those types of things.

So if the virus has been slowed in Alabama, is it a product of the life-changing steps that have been put in place or is it a signal to awaken the economy?

“I don’t have a crystal ball,” Orr said. "I’m not saying we open it up and go back to business as usual. But the things I’ve thrown out, I think we can be careful and cautious and still open businesses back up, open medical practices back up, not putting the hospitals in peril if they do have a spike so they can accommodate patients.

“The public is very aware and cognizant of the risks. If you are in a high-risk group, I’d be very cautious about my activities and continue to be.”