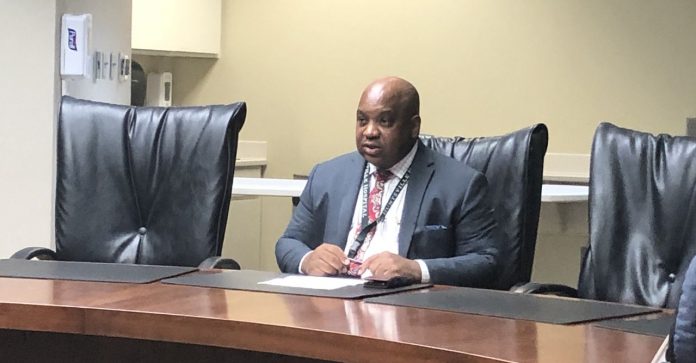 “We haven’t reached a peak based on the data I’m looking at on a day-to-day basis,” Huntsville Hospital Vice President for Operations Tracy Doughty said today. “As the community opened up, people spread the disease to their neighbors, and they’re going other places and they’re not being as careful as possible. Not wearing masks.”

The mask issue isn’t a matter of debate any longer. Beginning today at 5 p.m., almost everyone in Madison County is required to wear masks or facial coverings in public. The Alabama Department of Public Health issued that order late Monday at the request of the Madison County Board of Health.

Huntsville Hospital now has 72 people hospitalized with COVID-19, including 63 at its main hospital downtown and 9 in Madison. The youngest is 16 and the oldest is 94, Doughty said. “The average age is about 56,” the operations vice president said. “Ninety percent of those have multiple co-morbidities.” That means they suffer from conditions such as high-blood pressure and obesity.

Twenty-seven of the cases are in the Intensive Care Unit and 13 are on ventilators. The hospital has also converted three surgical floors to COVID care, and Doughty has adequate supplies and staffing for now. That includes ventilators, he said.

“The hospital at this time of year is already full,” Doughty said. “Adding 72 patients on top of that causes a little stress in some areas. To relieve that stress, we’ve worked with some of our surgeons, who’ve been wonderful about it to delay those surgeries to free up beds and nurses to take care of COVID-19 patients.”

The hospital also reopened its mobile testing site at John Hunt Park Monday. It will be open Tuesday through Friday from 9 a.m.- 3 p.m.

As of July 6, five of the top 10 days for new cases in Madison have come in July. Madison County reported a staggering 167 new cases last Thursday, the sixth highest single day case total for any county in Alabama since the start of the pandemic. Madison saw more new cases on Thursday than either Montgomery or Mobile saw in a day during the height of their outbreaks.

The 7-day average for new cases in Madison County now stands at 70.7.

Doughty said the hospital hasn’t seen any “hotbed” of spreading, such as a particular location or event, but added that if people were spreading the disease at Fourth of July events, symptoms won’t show up in attendees for 5 to 7 days later.

“So far, there’s no particular area we can pinpoint and say, hey, this neighborhood of this party or this gathering caused an influx,” Doughty said.

The hospital has also changed its visitation policy as it deals with the COVID surge. Patients in the hospital for reasons other than COVID-19 can have a caregiver in their room if needed, such as a family member who can help with medication or food, but other visitors are not allowed for now.

From April 1 through June 30, Madison County recorded 921 coronavirus cases. During the six days of July so far, it’s seen 470 - more than half the total from the previous three months combined in just six days.