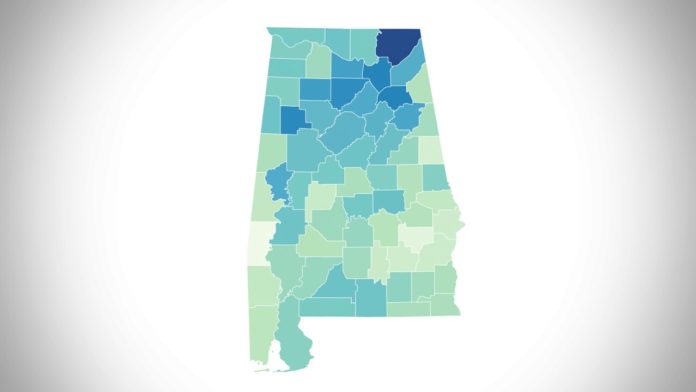 Madison County is in the midst of its worst bout with the coronavirus since the pandemic began.

The Alabama Department of Public Health reported 259 new virus cases in Madison County, home of Huntsville, on Tuesday. That pushes the 7-day average for new cases there to 265 per day - a new record.

Madison trails only the significantly more populous Jefferson County for the highest current 7-day average for new cases in the state. Outside of Jefferson, no county had ever averaged 265 new cases per day before Tuesday.

Madison’s virus pace has accelerated over the last week - it’s averaging nearly 100 more cases per day than it was at the start of December. And while ADPH has had struggles with backlogged data over the past several days, those backlogs don’t appear to have had a significant effect on the numbers in Madison County.

Madison, the third most populous county in Alabama, managed to avoid the types of outbreaks seen in the state’s other large counties early on. There was a time when Mobile County, which has about 40,000 people than Madison, had the most cases and deaths of any county in the state. Montgomery County, which is significantly smaller than Madison, also took a turn as Alabama’s hardest hit county.

For much of the pandemic Madison managed to avoid those types of numbers, but that’s no longer the case. Madison is averaging more cases than Mobile ever has, barring a short stretch in late October when a large backlog disrupted case counts in Mobile. And Montgomery’s historical high for 7-day average isn’t even close to Madison’s current numbers. Madison’s total case count since March is around 15,600 cases, which is more than Montgomery’s total but still trails the case count in Mobile by nearly 6,000 cases.

Madison County has also managed to keep its death counts much lower to date - 161 deaths have been reported there, compared to 383 in Mobile and 248 in Montgomery.

But Madison isn’t alone. Alabama has spent the first eight days of December shattering coronavirus records, and much of that surge has been centered in north Alabama.

Morgan County, just south of Madison and home to Decatur, is also in the midst of a surge. It added 144 new cases Tuesday, the eighth time in the last 10 days that it’s added at least 100 cases. The 7-day average in Morgan County is now 124 new cases per day - just three cases shy of the record set on Saturday.

When controlling for population, no county is having a worse outbreak than rual Jackson County, which since the start of December has added 140 cases per 10,000 people - the highest rate in the state. Jackson is in far northeast Alabama, just east of Madison. It’s one of just two counties that have added more than 100 cases per 10,000 since Dec. 1, the other being Etowah County, home of Gadsden, with a rate of 100.9.

Most of the counties with the highest per capita case totals so far in December are in North Alabama, including Morgan, which ranks 7th on that list.

If the FDA provides emergency authorization and the government provides free COVID vaccinations, when would you plan on getting a COVID vaccine?