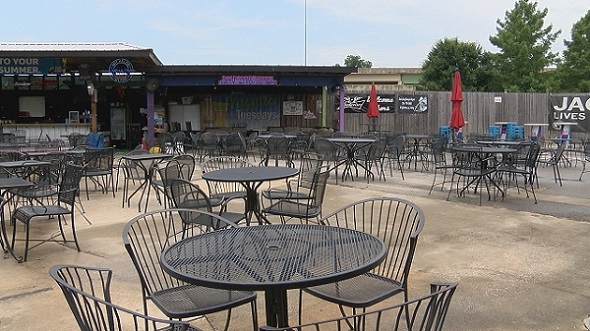 Bars will have to remove all alcohol from their tables as the Alabama Alcoholic Beverage Control Board passed an order stopping sales after 11.

WAAY-31 spoke with bar owners and learned how this order is affecting them.

The ABC board stated bars cannot sale alcohol after 11 and if they do, businesses can lose their license.

The board says this is to help stay ahead of the virus.

After a hard hit with coronavirus forcing them to shut down, now some bar owners are worried.

"They're slitting our throats at 11 o'clock when bars like this are specifically designed for a later night crowd. We get the bartenders, the waitresses, the waiters, kitchen staff that have to work all night long," said Janie.

Janie is the manager at Moody Monday's.

They usually stay open until 2 in the morning... but now that's all changed for her and her staff.

She told us she has no idea what she's going to do to stay afloat.

But it's not the same issue for every bar in Huntsville.

"We're not really a late night crowd because of what we do and the nature of it," said Jeremy Concepcion.

Jeremy Concepcion is the owner of Phat Sammys: a tiki-themed bar with a day-crowd, and its been closing at 11 for a while now.

Now...many bars may be closing early as well.

Bars in Alabama must now stop serving alcohol after 11, and if there's alcohol on tables after 11:30, the ABC board could take their license and be forced to close until a hearing is set.

The board set this rule to help curve the coronavirus...however, there's been push-back.

Many people in Huntsville have signed a petition to try and keep the bars open after 11.

While this may not directly affect conception... he says he's hurting for his friends in the business.

"I feel for you man. Especially the late night guys, of which we go to after work, it really sucks," said Concepcion.

Janie told us she worries about the future of the business and what lies ahead as the bar sits empty once again on a late Saturday night.

"You gave us hope by letting us open back up and then you took it away... That's not fair," she said.

The rule goes into effect Saturday night and will stay in effect for the next 120 days.

Though alcohol cant be sold inside, the rule doesn't apply to off-premises sales.

The ABC board has the right to determine if the rule needs to be extended or not.