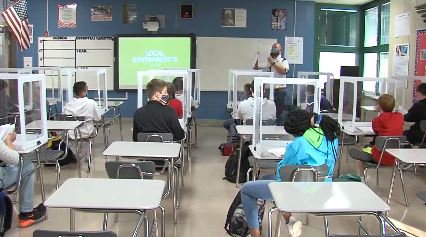 
Huntsville City School students finished their second day back on Tuesday after the ransomware cybersecurity attack caused the school system to shut-down.

Huntsville City School students finished their second day back on Tuesday after the ransomware cyber security attack caused the school system to shut down.

WAAY-31 wanted answers from the school system about how much the ransomware attack is costing the district and how many people are working on resolving the issue.

The school system tells us they won't be sharing that information right now because it is an ongoing security issue.

Parents with students in Hunstville City Schools want answers, though.

And students want help getting their assignments in and their grades up.

A task that has become difficult after the cyber security attack.

“I’m concerned mostly because a lot of kids are having a lot of late-work as of late because of the whole COVID situation and now they can’t do their work. So, they might fail a couple of their school classes. During the report cards, coming out in a few weeks,” said Aidan Pennington, New Century Technology High School student.

One student said a lot of his classmates have been struggling this year due to the coronavirus pandemic.

He says an already difficult situation is being made harder in the wake of the cyber security attack.

Students that have late work aren't able to turn in all those assignments because many were on the computer.

They’ve not been able to turn their computers back on in more than a week since the hackers launched the ransomware attack.

And one student says that the take-home packets are the best solution to the current problem.

But hopes teachers work with students in the future to get them on track.

"My ultimate hope is that they'll come to us and start explain the situation, what they plan to do in the future like how they're going to help the students that are having trouble and what they're going to do about the attack. I don't see this attack stopping anytime soon," said Pennington.

Now the school system will not let our cameras inside the schools to show you how classes are operating without technology.

Schools are not sure how long they will have to teach without technology and if the school days last week will have to be made up in the future.

Virtual students will continue to do weekly take-home packets until the system is up and running.