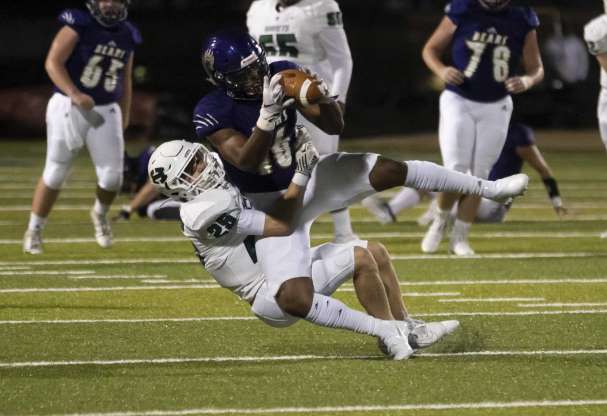 MONTGOMERY — Huntsville faced perhaps its toughest test of the season Friday night, and the team responded with a championship performance in the waning moments.

The No. 4 state-ranked Hornets captured at least a share of the District 10-5A (Div. II) title and the No. 1 seed for the playoffs with a 23-15 victory over Montgomery on the road.

“This group, they don’t really talk a lot, they’re not emotional, and they don’t get too high or low,” Huntsville coach Rodney Southern said. “I hope, personally, as the person in charge, I hope that this is expected. We’ve talked about that, and they obviously know if you keep winning, you’re going to win (the district title), but I hope they are getting used to it.”

Pulling out the triumph took a pair of clutch efforts from the Huntsville defense. The Bears were driving for the tying score when Quaterian Riles intercepted a pass with 44 seconds to play. That should have allowed the Hornets to drain the clock, but a miscue spoiled the plan.

Huntsville fumbled a snap while trying to take a knee, and Hunter Delahoussaye pounced on the ball to give Montgomery one last shot. The Bears got all the way down to the Hornets’ 19-yard line before Riles made another huge play with a sack as time expired.

Huntsville (8-0, 5-0) has boasted the top defense in the district all season.

“They’ve played well all year, and we rely pretty heavily on them,” Southern said. “Obviously, we stuck them in a really bad situation right there that shouldn’t have happened. We don’t ever feel like our defense is out of it at any point, no matter where we are on the field, but you don’t want to give a good football team like that two opportunities.”

The Bears (6-3, 4-1) could still earn a share of the district title, but they would need Huntsville to lose against Fulshear. The Hornets will have the top seed regardless and will be making their fourth straight playoff appearance after going three rounds deep last season.

Montgomery, ranked No. 9 in the Class 5A Houston Area Media Poll, can clinch the No. 2 seed with a victory over rival Lake Creek next week. The Lions (6-3, 3-2) have already secured their first-ever postseason berth and won the MoTown Showdown 27-10 last year.

“Hopefully we just get healthier and just keep improving,” Montgomery coach John Bolfing said. “That’s the goal - try to get better each week. I feel like for the most part, we’ve done that. Lake Creek is a good football team, so it’s going to be knock-down-drag-out.”

Montgomery jumped out to a 3-0 lead against Huntsville with a 39-yard field goal from Nick De La Alas, but the Hornets answered with a 22-yard boot from Christian Avelar.

The Bears regained the lead with three minutes to play in the opening quarter as running back Jalen Washington caught a swing pass from Brock Bolfing and sprinted 37 yards up the right sideline for a touchdown on third-and-long.

The Bears failed to convert on the point-after attempt, however, which opened the door for the Hornets to pull ahead with a touchdown. Huntsville did just that midway through the second quarter with a 6-yard scoring run from Jaylon McClain.

Montgomery made two costly mistakes in the first half. The Bears lost a fumble near the red zone in the opening quarter, and a high snap on a punt attempt gave Huntsville the ball at the 12-yard line with about three minutes remaining in the second. The Hornets took advantage two plays later as McClain reached paydirt for a second time from 8 yards out.

Huntsville walked into the locker room with a 17-9 lead.

“I thought our kids played hard, but we’re disappointed we made mistakes that we normally don’t make, and it cost us the game,” said Bolfing, whose team was playing without three starters on the offensive line. “You can’t make mistakes against a good football team.”

The Hornets went ahead by two scores in the third quarter with a 43-yard field goal from Avelar, but Montgomery responded with an 8-yard touchdown run from Washington. That left Huntsville with a slim 20-15 advantage at the end of the period.

Avelar connected on yet another field goal, this time from 24 yards out, to give the Hornets a 23-15 lead with 3:20 remaining in the game. That would cap the scoring as the Bears’ final efforts came up just short.

“My defensive staff doesn’t get enough credit,” Southern said. “They prepare our kids to know what’s coming, and I think our kids executed tonight. I think a couple times where they hit us (for big plays), we might have been a little confused, but Coach Bolfing does an amazing job over here and has for however many years he’s been here.”

How To Spend A Perfect Day In Huntsville, Texas