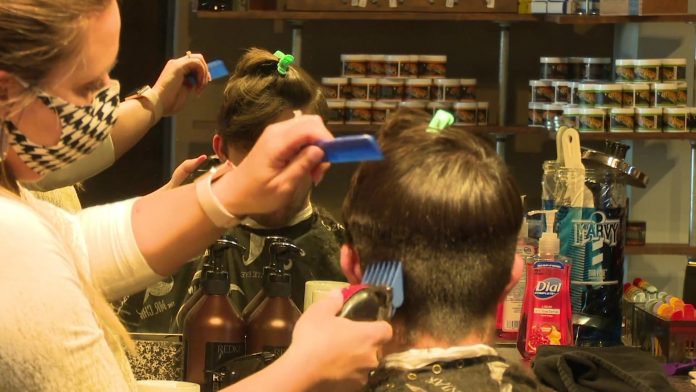 HUNTSVILLE, Ala. — Governor Ivey updated her “safer at home” order last week. Some of the changes include close-contact service providers like barber shops, hair salons, nail salons and tattoo services to reopen.

Terrame is a day spa and salon with many services such as hair salon, nail salon, makeup, massage therapy, hydrotherapy, facials, waxing, spray tans, and more. The business was prepared to stay closed until the end of the governor’s original “safer at home” order, on May 15.

The amendment to the order from Governor Ivey came as a surprise and Mike Johnson, the co-owner of Terrame says it caused them to speed things up.

“This just jump-started it a little bit, so we have had to kind of revamp, speed everything up,” said Johnson. “It added a little bit of stress but we are just thankful she’s letting us open.”

The amended “safer at home” order allows service providers like hair and nail salons to open with restrictions starting Monday, May 11. Terrame took the day to contact their customers. Johnson says they missed thousands of appointments over the last six weeks.

“Our front desk staff is, they’re the heroes, they are our frontline workers,” said Johnson. “Thousands of phone calls between the last few days, and that’s a little bit overwhelming but it’s also reassuring that everybody wants to get back in.”

When customers do return to Terrame, they’ll notice some changes.

“A lot of these are just protective things we’ve never had to think about before, right? The protective shields, the gloves, the masks,” said Johnson. “We are closing down certain areas. Of course, the six foot spacing. We have had to move chairs.”

Being a full-service salon, some services are returning, while others are remaining on hold, like their massage service.

“We’d like to be open full blast,” said Johnson. “Turn the spigot on, and go, right? But I think a slow approach to it because we’re not so concerned about the short run. We are looking at the next ten years, right? So what is the best answer for the long run?”

Johnson says the best answer for him is to keep his workers and his customers safe.