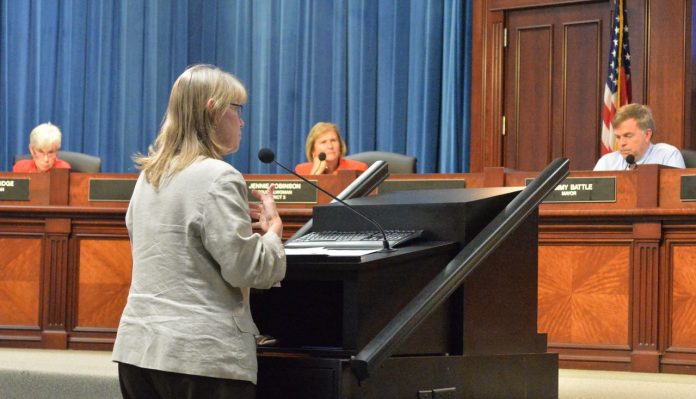 
The COVID-19 pandemic is costing Huntsville government an estimated $15 million in revenue this year, but departmental belt-tightening is absorbing the loss meaning no dip into reserves.

“I can’t tell you how big this is,” city Finance Director Penny Smith told the City Council in a budget update Wednesday night.

The news is not as good for organizations outside city hall but supported by local taxes such as the Von Braun Center, Huntsville Museum of Art, Arts Huntsville and the Convention and Visitors Bureau.

Smith started with an overview of the city’s ongoing strengths and weaknesses. The jobs market remains strong and stable anchored by Cummings Research Park, Redstone Arsenal, the Mazda-Toyota factory and FBI buildup. Charts showed upward trends in sales and use and lodging taxes in 2020 before the pandemic hit. The city appeared on its way to a strong financial year.

Sales and use tax revenues from businesses are actually up 2.8 percent compared to this time last year, Smith said. Taxes from grocery stores and wholesale clubs like Costco and Sam’s are up, Smith said, but taxes from restaurants, sports and entertainment are down. Auto and retail sales dropped early in the pandemic but are coming back, she said.

Lodging taxes paid by hotels and motels are down 14 percent, however, as the virus has cut conventions, meetings and tourism. That’s the tax that funnels money toward things like the Von Braun Center and museums. The city expects to end the year with lodging tax revenues 25 percent below last year and 35 percent below budget expectations or about $4 million.

Gas taxes are down 25 percent for the last three months and expected to end the year 7-10 percent below budget. The simplified sellers use tax revenue from online sales is double city expectations.

Savings by city departments included reductions in such things as overtime and hiring. Asked about projects, City Administrator John Hamilton said to AL.com, “There were no ‘stop doing this’ orders, nothing we said we are just not doing. Some projects were pushed” a little into the future.