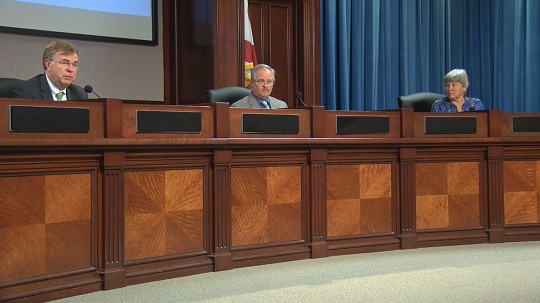 
Wednesday WAAY 31 asked what Madison County learned after a national task force tracking coronavirus visited because of a spike in cases in Huntsville. The Madison County EMA Director told WAAY 31's Sophia Borrelli they received three recommendations from the national task force less than 24 hours ago, now they’re trying to figure out how to implement them. Madison County Emergency Management Director Jeff Birdwell said the COVID-19 response assistance field team or CRAFT wants its data analysis experts to look at coronavirus statistics in the county. "We know the things that we are tracking locally now. The first step associated with that is actually to meet with those folks that have expertise in that area and we talked about asking questions, what can you provide," said Jeff Birdwell, Madison County EMA Director.

Those numbers are already provided to the federal government. Birdwell couldn’t explain exactly what data analysts want to study. The second recommendation was about getting the correct messaging to the public, but again, no specifics were given. "What particular groups do we see that we need to improve in getting the message as far as COVID-19 precautions out to," said Jeff Birdwell, Madison County EMA Director.

Finally, the task force talked about what the start of the school year looks like. One day after the recommendations, Huntsville, Madison city and Madison County schools all announced virtual learning for the first nine weeks of school. "Bringing in the kids in a certain way and conducting traffic at least as far as the schools are concerned in a more socially distanced way," said Jeff Birdwell, Madison County EMA Director.
After the announcement from all three school districts in Madison County, health professionals and local leaders weighed in on the decision. Health officials said it's our responsibility as a community to stop the spread of the virus so educators don't have to worry about our children's education and the virus at the same time.
"Our responsibility as a community is to knock down the spike and get us to where we have this under control so that our school officials don't have the distraction of trying to deal with what's happening in the community," said Pam Hudson, CEO of Crestwood Medical Center. Crestwood Medical Center CEO Pam Hudson said while the school districts did not ask her opinion about sending children back to school, she thinks starting a school year during a spike in coronavirus cases is tricky.
Huntsville Mayor Tommy Battle said the districts talked with state’s department of public health about the decision. "This is a tough one. Gosh, everybody wants school to go back. We want to go back to normal. We want to be normal, but unfortunately we are not in normal times so, we're having to adapt, we're having to evolve. We're evolving our schools to where we can actually do education, but we're going to have to do it from the homes for a little while," said Tommy Battle, Huntsville Mayor. Battle said as much as he would like to move forward and have our children in school, this school year cannot start that way. "We're evolving our education so that we can do education online, but we're adapting to the current conditions that are out there because the first time that we drop everyone off and we put the back in school and then we a spike and then we have a cluster spike in a school, we're going to lose the confidence of the public on how we can safely educate our children," said Tommy Battle, Huntsville Mayor.
Birdwell said right now they are coordinating with the state and task force to see what the next steps are as to how they can implement those recommendations.