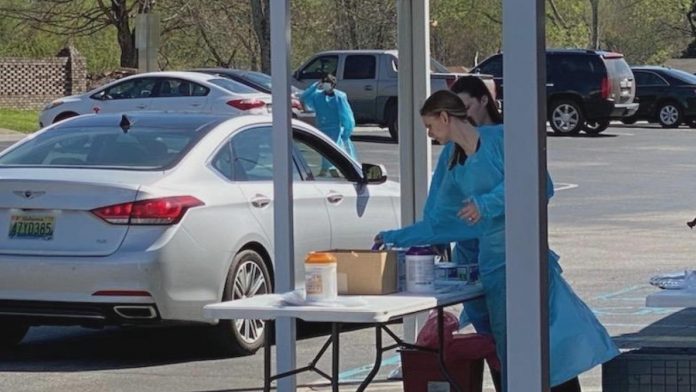 On Wednesday night, the sanctuary of Fellowship of Faith Baptist Church Rang with gospel music. A handful of people dotted the seats while others watched a live stream of the bible study from their homes.

A few weeks ago, the church was host to a different kind of service.

"Once we made the announcement that we were having tests, the phones just readily started ringing and we filled up real quick," said Pastor Troy Gardner.

Near the end of March, Huntsville Hospital selected Fellowship of Faith along with four other churches as testing sites for hundreds of people. Gardner said his church tested at least 50 people.

He added that having testing in his community helped those he preaches to understand the amount of work needed before things get back to normal.

"You have to tell people to be prayerful and careful. Yes, you want the economy to be started again, but you also want to save lives. And I think saving lives is more important than saving the economy at this time," said Gardner.

In addition to the churches, Huntsville Hospital CEO David Spillers said they also worked with the Huntsville Housing authority to reach those in the public housing community as well as people in homeless shelters.

He said that they didn't hold to the recommendations of the Centers for Disease Control that suggest that someone should be presenting with symptoms before they are tested.

"In these communities, we're not necessarily following the criteria. We're trying to take people who are high risk and don't have quite the sanitation and ability to separate and do the things that some of us can do to make sure that they don't have a case and that we can take care of it at an early time if they do," said Spillers.

He said that the Huntsville area is fortunate to have a fair amount of tests available, so they are able to do extra testing like this

The outreach effort was coordinated by a group of people, including Alabama House Minority Leader Anthony Daniels. He said being able to test at-risk communities is key to moving closer to reopening the economy.

"Individuals that are having no symptoms are really more of a priority in getting those test results so that they are not adding to the community spread of the virus," said Daniels.

Blue Spring Road Church of Christ was another testing center. Its pastor, Floyd Rodgers, was among the 70 people who were tested.

"There were people that actually rode by, they saw that they were here, they turned around and came back around to get tested. So yes, it's very important just for them to come into the community, the different communities and offer this service. We thank them," said Rodgers.

Spillers said they plan to do another round of community testing the Triana community on Friday.