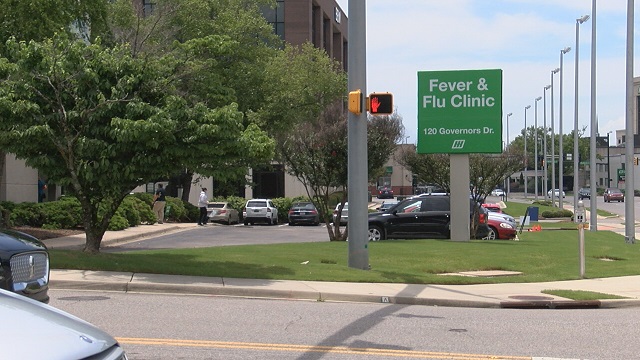 WAAY 31 worked to learn more from Huntsville Hospital about testing capabilities and an increase in the demand for testing.

A spokesperson for Huntsville Hospital said they tested more than 300 people at the Fever and Flu Clinic on Monday, and some people told us there was a more than two-hour wait to get tested.

"Testing equipment continues to be an issue. I wish we had the supplies to do another 2,000 tests in-house, because I think we could provide better care to the community if we have access to those," he said.

Spillers said the hospital purchased additional machines to process coronavirus tests in the hope of getting a larger allotment of testing supplies.

For two days, WAAY 31 heard from viewers who went to the clinic to get tested for the virus. They were told there was an hourslong wait, and some people were turned away after being told the clinic hit capacity.

A hospital spokesperson said they're seeing an increase in the demand for testing. They also said the clinic's parking lot is full, patients are not allowed in for testing and there are other community avenues for testing.

WAAY 31 reached out to urgent care centers across Madison County on Tuesday. We were told they are out of testing supplies and waiting for more.

The hospital said tests currently processed for immediate return in-house are those of inpatients and hospital employees. The other tests are sent out to labs in the state and can take at least two to three days for patients to get results.

"I'd love to have twice as much capacity. We have talked to the vendors that supply us. They have basically said because everyone in the country is trying to do testing, we are basically limited in what we are getting right now," Spillers said.

The hospital said the best way to get tested is to show up at the clinic. We asked if they're considering reopening the drive-thru clinic at John Hunt Park like they had back in March.

The hospital said if they keep seeing the number of patients they're seeing each day right now, they might.