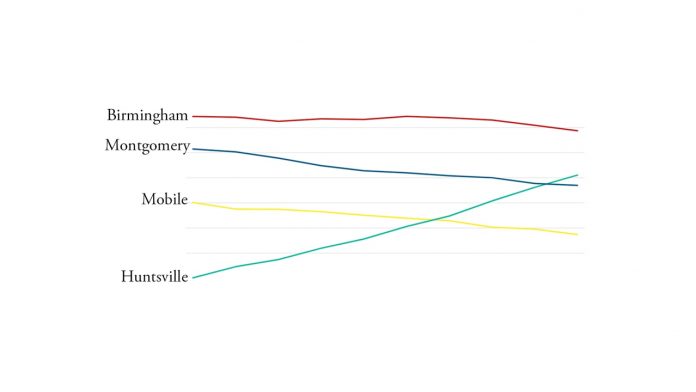 The Rocket City is well on its way to becoming the largest city, as Huntsville’s population is set to surpass Birmingham’s within the next three years, if not faster. Meanwhile, Alabama’s other large cities have each seen their populations shrink.

Population estimates released last month by the U.S. Census Bureau show Huntsville has added thousands of people a year since 2010, leaping from a population of 180,000 in 2010 to over 200,000 in 2019. That 20,000 person increase is the largest of any city in the state over that time period.

Huntsville started last decade as the fourth largest city in Alabama. It passed Mobile in 2015 and last year it officially passed Montgomery, the state capital, to become the second-largest city in the state.

Birmingham, meanwhile, has lost population in seven of the last nine years. And the pace is picking up.

Montgomery and Mobile, the third and fourth most populous cities in Alabama, respectively, have lost population at an even faster rate.

Both Montgomery and Mobile are among the fastest shrinking U.S. cities with at least 50,000 people - Montgomery is 30th and Mobile 35th on that list.

But Birmingham’s metro area, which includes several fast-growing cities like Chelsea, Hoover and others, is still by far the largest metro area in Alabama. The Birmingham metro consists of seven counties and is home to more than 1 million people. Despite Birmingham city’s population loss, the metro area has grown steadily since 2010, especially in the suburbs of Shelby County. Huntsville’s metro area, meanwhile, consists of just two counties, and is home to just over 471,000 people, the second largest metro area in the state.