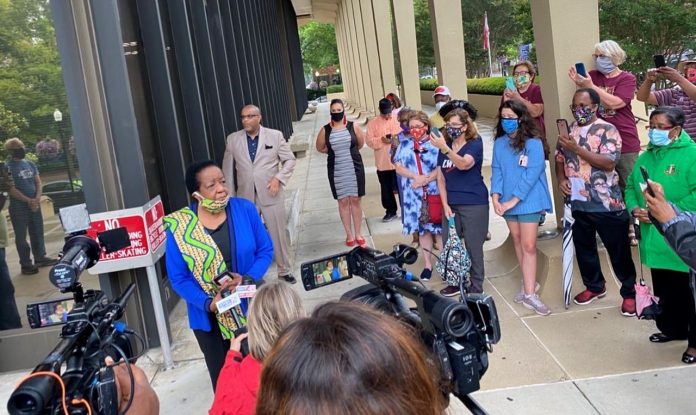 
While the Madison County Commission convened at the county courthouse in Huntsville today for its bi-weekly meeting, other local leaders gathered seven floors below, on the courthouse steps to pressure the commission to defy state law and remove the nearby confederate monument.

“We are concerned about the commission’s commitment to move forward,” said State Rep. Laura Hall, D-Huntsville. The commission previously voted at its June 10 meeting to seek permission from the state to move the monument, which would otherwise be prohibited under a 2017 state law.

“Some laws are unjust, and the Alabama Memorial Preservation Act of 2017 is one of those unjust laws,” said Hall.

One day after the Madison County Commission voted June 10, the Alabama attorney general’s office said there is no legal pathway to remove the Confederate monument, which was erected at the courthouse in 1905.

Commissioner JesHenry Malone urged the crowd to have patience as the commission works through legal channels to get the statue moved to another location.

“We are absolutely committed to do exactly what we said, and that is moving this statue,” Malone said. “Give us time to do the work. We all want this statue gone.”

His pleas for patience were met with irritation by some in the crowd, who began chanting “Justice delayed is justice denied.”

Influential Huntsville organizations and business leaders, including the Committee of 100, Downtown Huntsville Inc. and the Historic Huntsville Foundation, along with several faith leaders have called for the statue’s removal.

This week the Huntsville City Council will consider a resolution regarding the relocation of the monument.

Hall said she would like to see Madison County enter into an agreement with the state attorney general’s office to remove the statue and pay the $25,000 fine. The City of Mobile entered a similar agreement June 15, in which the city agreed to pay the fine after removing its statue of Confederate Navy Adm. Raphael Semmes.

Catherine Hereford, with the local organization Tennessee Valley Progressive Alliance, said her group and others had already raised the $25,000 to pay the state fine for the statue’s removal.

“I’m offering the check today,” she said. “This statue is a good representation of all the other inequalities we have in our institutions.”

She said she was concerned about “a lot of feet-dragging” from the commission over getting the statue removed. But, she said, she hoped “the summer of 2020 will be the time, not that we change or erase the history of the past, because that’s impossible. But we make history by changing the future in the name of unity, equality and human decency.”

David Person of Huntsville is helping organize a “Move the Monument” social media campaign and said local groups will continue to hold weekly protests at the courthouse until the monument is removed.

State Rep. Anthony Daniels, D-Huntsville, told the crowd that what Alabamians have learned about the Civil War are the “Cliff’s Notes” version of history, highlighting state’s rights over the reality of slavery.

“State’s rights, when you hear that, you don’t think about the pain that caused,” he said.

“Let’s continue to pressure our elected officials to make the right decisions, but let’s go to them with the people’s agenda that’s going to dismantle systematic and institutional racism,” he said. “Until those things happen, we’re going to be marching next year.”