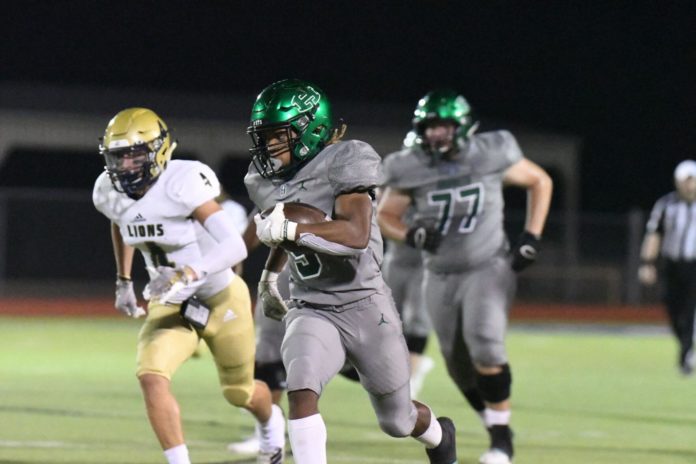 
MADISONVILLE — Following their sloppiest first half of the season, Huntsville head coach Rodney Southern urged his team to wake up.

The Hornets did just that, and then some.

Leading Montgomery Lake Creek just 14-7 at the break, Huntsville erupted for 28 unanswered points over the first eight minutes of the third quarter. This stretch put the rout in motion, as the undefeated Hornets cruised to a 49-14 victory on Friday night at Madisonville High School.

“He went in and, like every coach should, he got on our butt,” senior defensive back Cody McLerran said of Southern’s halftime message. “He singled a few people out … and when we came back out, we just lit them up.”

Junior quarterback AJ Wilson started the offensive explosion for Huntsville (7-0, 4-0) in the opening minute of the second half, splitting a pair of defensive backs on a play-action pass to senior receiver Jordan Woodberry for a 79-yard score.

“It boosted my confidence really high,” Wilson said. “After that, I knew we were going to take off on them.”

Roughly 90 seconds later, Jaylon McClain torched the Lake Creek (6-3, 3-2) defense for an untouched, 56-yard touchdown run, one of three rushing scores on the night by the junior running back.

The Hornets’ next two touchdowns came in less conventional, but equally exciting fashion. Christian Avelar found Woodberry for a 66-yard score on a fake punt, with Wilson stretching the Huntsville lead to 42-7 after taking a botched snap 68 yards for a touchdown.

Wilson finished the night with 205 yards and a pair of touchdowns through the air, while McClain racked up 136 yards on the ground — marking his fourth consecutive 100-plus-yard rushing performance. Woodberry hauled in 13 catches for a career-high 260 yards, as Huntsville out-gained its opponent 506-217.

“We challenged some guys,” Southern said. “I tell them, ‘If I challenge you, it means I expect more out of you than what we’ve done.’ There were some offensive linemen that weren’t coming off the ball, and I think we did much better in the second half.

“Sometimes when you come off an open week there is a lull, and we have to play much better in the first half next week. But to win a district game 49-14, I’ll take that.”

Huntsville’s defense allowed a pair of touchdown drives, but outside of that stifled a Lake Creek offense that entered the night as the most productive in the district.

Senior defensive tackles Ed and Brian Bobino each sacked the quarterback, with McLerran, Jadarian White and Bun Shelly forcing fumbles for the Hornets. Jarrett Ortega also pulled down an interception that was returned 55 yards for a touchdown.

“Me personally, I was thinking we have to lay it to them,” McLerran said. “The whole defense did.”

Huntsville secured a playoff spot with Friday’s victory, setting up an opportunity to clinch the District 10-5A, DII title with a win at Montgomery — which is tied with the Hornets for first place at 4-0 — next week. Kickoff is scheduled for Nov. 27 at 7:30 p.m.

“I’m very excited, but the job isn’t done yet,” McClain said. “We have to just keep on fighting and continue getting better each and every week.”